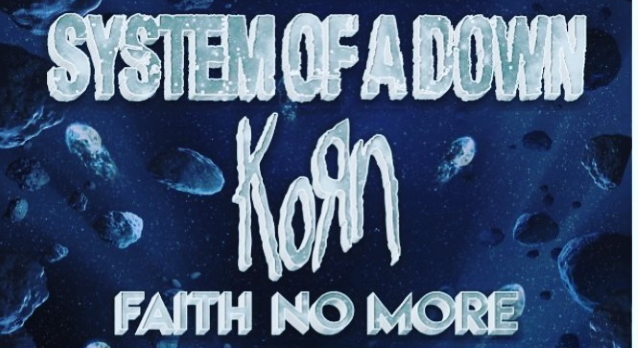 SYSTEM OF A DOWN, KORN + FAITH NO MORE: Los Angeles Concerts To Be Rescheduled

The May 22 and May 23 concerts at Banc Of California stadium in Los Angeles, California featuring SYSTEM OF A DOWN, KORN and FAITH NO MORE have been postponed due to the coronavirus pandemic that is sweeping the globe. The new dates have not yet been announced. HELMET and RUSSIAN CIRCLES were also slated to appear on the bill.

KORN announced the postponement in a statement earlier today. They wrote: "Our upcoming Banc Of California stadium shows on May 22 & 23 are proactively being rescheduled out of an abundance of caution for our fans, crew, and venue staff.

"As soon as we have the new dates finalized, we will inform everyone, and all tickets will be honored accordingly.

"For further ticket information, visit livenation.com/ticketrelief or your point of purchase.

"To our amazing fans, thank you for understanding."

The shows were scheduled to come half a decade after the release of the group's acclaimed reunion album, "Sol Invictus".

An important message regarding our May 22-23 shows in Los Angeles, CA.

We deeply appreciate your patience, & when we have a better idea of social gathering guidelines, we will confirm & announce the rescheduled dates. In the meantime, please stay safe. https://t.co/FM2ZZF4ms6pic.twitter.com/jW0peSo0z4