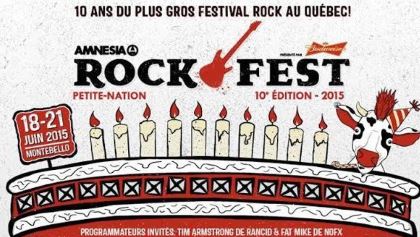 The Outaouais Rock team has unveiled the complete lineup for the tenth edition of Amnesia Rockfest, the largest rock festival in Canada, which will be held from June 18 to June 21 at the Montebello marina in Quebec: opening night will be on June 18, two main days on June 19 and 20, camping from June 18 to 21. Rockfest will mark its tenth anniversary with a monster lineup that includes over 100 bands: rock, metal, punk rock, industrial, hardcore and even rap.

Among the headliners included will be California band SYSTEM OF A DOWN, one of the most requested bands by festival-goers, who will perform a rare concert this year to headline on Saturday night. Also, the very popular rock group LINKIN PARK will be in Montebello to headline on Friday night.

As always, lots of punk rock will be featured: FLOGGING MOLLY, GOGOL BORDELLO, PROPAGANDHI, GOLDFINGER, LESS THAN JAKE, GOOD RIDDANCE, TEN FOOT POLE, THE BOUNCING SOULS, SATANIC SURFERS (reunion) and many others. Adding to the mix are several punk and hardcore legends such as BUZZCOCKS, DESCENDENTS, ALL, THE EXPLOITED, GBH and Michale Graves of MISFITS.

Rockfest will also present legendary industrial groups MINISTRY and SKINNY PUPPY, for their first show together since 1988. Many metal bands will perform, including PARKWAY DRIVE, DOWN with Phil Anselmo of PANTERA, FEAR FACTORY, ATREYU (reunion),CARCASS, BOLT THROWER for a very rare Canadian appearance and the grunge-era survivors MELVINS.

In rotation with the main stage, the Quebec stage will present the pillars of the Quebec alternative scene, including the first appearance at Rockfest of LES COWBOYS FRINGANTS. Several disbanded groups will get back together for one show only at Amnesia Rockfest: BANLIEUE ROUGE, GROOVY AARDVARK, SUBB, MAP, PENELOPE, BLIND WITNESS, BALD VULTURE, OVERBASS, LES ÉKORCHÉS and CAPITAINE RÉVOLTE. Several festival regulars are returning, including Mononc' Serge and THE PLANET SMASHERS.

Some of this year's new features include having several comedians such as Tom Green, Steve-O from "Jackass" (first Quebec appearance in 10 years, since the 2004 riot at the Metropolis) and Mike Ward. Several other surprises and secret performances are in store for festival-goers. Finally, a reminder that Tim Armstrong of RANCID and Fat Mike of NOFX are curators of the 10th anniversary edition.

Tickets are on sale now at www.amnesiarockfest.com and wristbands will soon be available in Amnesia stores. Once again, the festival is offering weekend passes at a very affordable price: $120 + fees and taxes, which works out to less than a dollar per group! With the buzz generated so far and such a solid lineup, the team is confident that the festival will sell out for the third straight year. Please note that VIP packages are also available.

Several changes will be announced in March concerning transportation, parking and camping in order to accommodate the growing number of festival-goers each year. This will include new public transportation options being offered, as well as a new VIP campground and a campground for RVs and trailers.

Founded in 2005 by a 17-year-old kid from Montebello who wanted to transform his small town into a rock paradise, Amnesia Rockfest is now the biggest rock music festival in Canada. Known for its impressive lineup, affordable tickets, party vibe and pristine location along the Ottawa River, Rockfest generated over $20,000,000 in economic spin-offs last year. 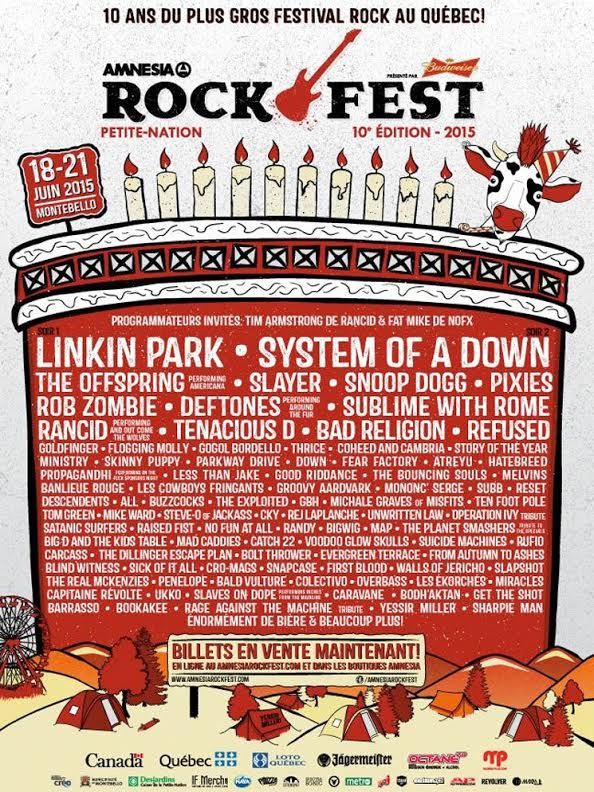