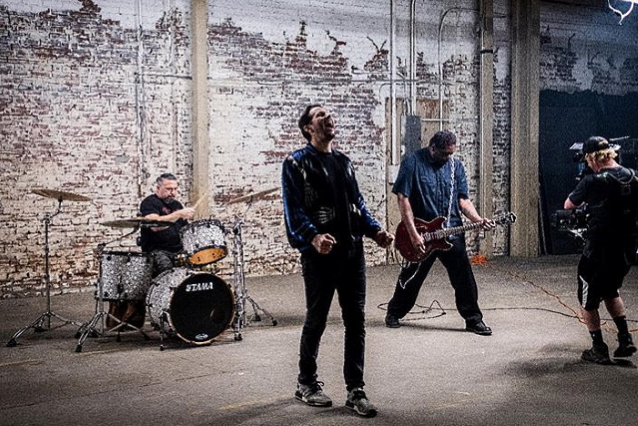 SYSTEM OF A DOWN's JOHN DOLMAYAN And AVENGED SEVENFOLD's M. SHADOWS Team Up For THESE GREY MEN Video

On Saturday (January 18),SYSTEM OF A DOWN drummer John Dolmayan filmed a new music video for his THESE GREY MEN project. The track, which features a guest appearance by AVENGED SEVENFOLD singer M. Shadows, will appear on THESE GREY MEN's upcoming covers album, which is due later in the year.

Dolmayan took to his Twitter to share a few photos from the video shoot and wrote in an accompanying caption: "Some great shots from yesterday @avengedsevenfold @thesegreymen"

John spoke about THESE GREY MEN's upcoming LP during a recent episode of "Drinks With Johnny", the Internet TV show hosted by AVENGED SEVENFOLD bassist Johnny Christ. He said: "It's a lot of fun. I worked with really cool people… Again, I'm not trying to create something to compete with SYSTEM. I'm just doing it because I enjoy playing music. I'm not a songwriter, but I can arrange the fuck out of songs. So, I arranged these songs in a way that I thought was interesting and I listened to songs that I thought maybe there was a lack. Or what would I do if I played this song? What would I do if I was presented this song?"

Dolmayan first announced the formation of THESE GREY MEN in 2014, promising at the time that the project would produce a star-studded covers album and tour.

THESE GREY MEN's debut album was originally supposed to include new renditions of songs by artists such as RADIOHEAD, OUTKAST, DAVID BOWIE and many more, recorded by a band of all-star players led by Dolmayan and his collaborator James Hazley, formerly of the band COCKEYED GHOST. Among the other guests that are expected to appear on the disc are Dolmayan's SYSTEM OF A DOWN bandmate Serj Tankian (on David Bowie's "Starman" and TALKING HEADS' "Road To Nowhere") and RAGE AGAINST THE MACHINE guitarist Tom Morello.