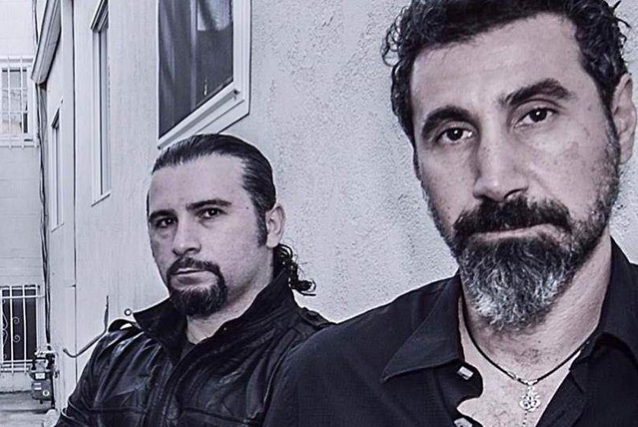 SYSTEM OF A DOWN's Serj Tankian has admitted that it's "frustrating" to see his bandmate John Dolmayan publicly voicing his support for Donald Trump.

In recent months, Dolmayan has praised Trump and has accused Democrats of "demonizing" the president and "blaming him for everything under the sun." The drummer also called Democrats "the true bigots" who "fought to maintain slavery" and were "directly responsible for 70 plus million abortions, a large majority of whom were black."

Tankian discussed his relationship with Dolmayan during a recent interview with Forbes about the current crisis occurring in their cultural homeland of Armenia and Artsakh.

Asked if it's frustrating for him to see John so publicly supportive of America's 45th president, especially considering Dolmayan is Armenian as well, Serj said: "He's my brother-in-law and my drummer. Is it frustrating being politically opposite to your own drummer and brother-in-law? Fuck yeah. Of course it's frustrating. But that's having to do with American politics. When it comes to Armenian issues, we're on the same exact page. We know what injustice is happening, we work together. We're doing different auction activities and working together on many fronts. The Armenian nation is united, whether you voted for Republican, Democrat or neither. But I was a Bernie [Sanders] supporter, I still am. I feel like he still would've been the best choice going forward. But I'm okay with [Joe] Biden. The elections are coming up and normally I'm very vocal, but this war and the daily death toll [in the disputed region of Nagorno-Karabakh] has really taken up my full spectrum of focus."

Last month, Dolmayan defended his reasons for voicing his political views that are ideologically opposed to those of Tankian, telling the "Deviant Gentlemen" podcast: "SYSTEM OF A DOWN has a legacy of being left-leaning, which isn't always the case. Serj, of course, is responsible for the lyrics, but they didn't always represent the band in the way that we maybe wanted [them] to. There's four individuals in the band. I don't speak for any of the individuals except for myself, and neither does Serj. But because he had that platform of writing lyrics, the perception was out there that that's how the band felt at all times, where I don't even think Serj necessarily felt those ways at all times. You're supposed to have diversity of opinion even within your own mind, and you should judge things based on information that's presented to you.