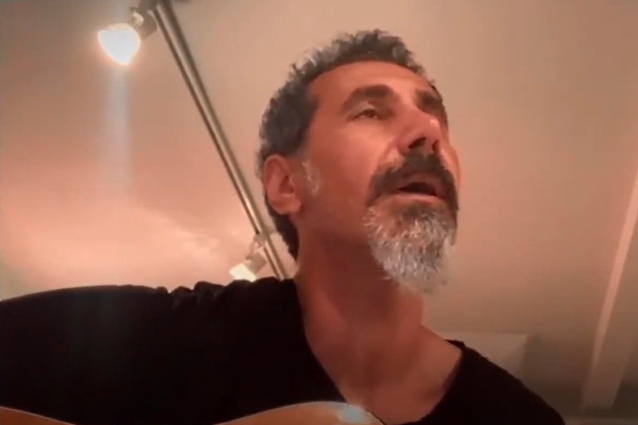 SYSTEM OF A DOWN's SERJ TANKIAN Performs At 'Rock For Artsakh: A Concert for Peace' (Video)

On October 28, SYSTEM OF A DOWN frontman Serj Tankian was part of "Rock For Artsakh: A Concert for Peace" online concert organized by ONEArmenia to raise funds for the people in Artsakh and Armenia. Serj performed a song written for all the people that lived freely and happily in Artsakh before the recent attacks.

"For their safety. For their future. It's time to give — all of us," Serj said.

In the early morning hours of September 27, forces in Azerbaijan began a large scale pre-meditated offensive attack on Artsakh (Nagorno-Karabagh),an independent and autonomous country that borders Armenia, populated with a vast majority of ethnic Armenians. International peace keeping powers are doing very little to dissuade Azerbaijan's advances and the people of Artaskh are doing everything they can to defend their lives and homeland, where they have lived for thousands of years. For them, this a matter of survival, and nothing more as Azeri forces are trying to do little less than eradicate the 150,000 people that these lands are home to.

Artsakh gained independence in the early 1990s from Azerbaijan after years of war and conflict beginning soon after the 1988 collapse of the Soviet Union, of which both countries were a part of. After gaining its own independence from the Soviet Union, Armenia has been a guarantor of Artsakh's security. A cease-fire was agreed to between the countries in 1994, but over the past two decades, Azerbaijan has frequently broken this pact via mostly minor to moderate advancements and skirmishes along the line of contact.

This time, Azerbaijan, with the aid of Turkey's Recep Erdogan regime and military forces, launched a large-scale offensive attack along the full eastern border of Artsakh and has launched attacks within the borders of Armenia as well.