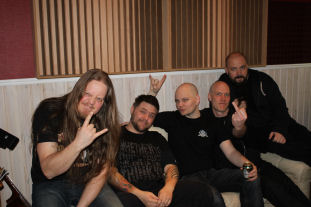 Swedish metallers TAD MOROSE have announced the addition of guitarist Kenneth Jonsson to the group's ranks.

Commented TAD MOROSE guitarist Christer "Krunt" Andersson: "Kenneth is a very talented guitar player. Some of you probably already heard of him from bands such as TORCH and THE CITADELL.

"We have been searching for another guitar player since Markus left the band and we are really pleased with Kenneth.

"We will play the first show with Kenneth at Tuppenz in our hometown of Bollnäs, Sweden on Friday the 6th of April. This show will also include CIBOLA JUNCTION and a suprise headliner!

"TAD MOROSE will also play at the Swordbrothers Festival in Germany on September 8th.

"We are really, really looking forward to get on the stage again! ....and last but not least, to get that album out!!!! When that is done, we will have a release party where I will celebrate until it hurts!!! Anyone dare to join?

Added Kenneth: "It's an honor to be a part of TAD MOROSE and I'd like to thank the guys in TAD MOROSE for giving me the opportunity. I've been listening to the band since the '90s and have always thought that they where one of the best heavy/power metal band out there. The decision for me to make was even easier after listening to the new TAD MOROSE songs for the upcoming album, 'Revenant'! This is truly going to be a blast and I hope to see all of you fans out on the tour!"