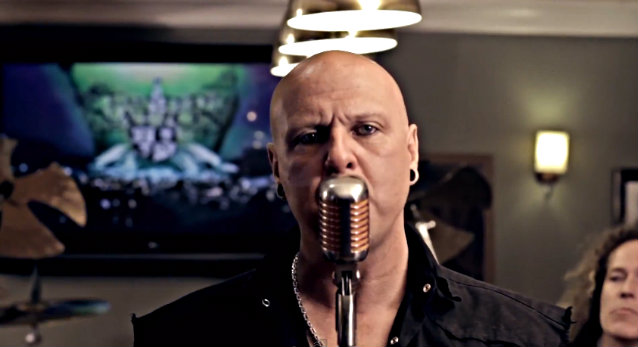 "Dare You", the new video from U.K.-based modern hard rockers TAINTED NATION, can be seen below. The song is taken from the band's debut album, "F.E.A.R.", which was made available on January 25 via Massacre Records. The CD was produced by Pete Newdeck and mixed/mastered by Dennis Ward.

Newdeck, who is mostly known for his work with EDEN'S CURSE and bands like GRIM REAPER, KILLERS and Steve Grimmett, started writing songs with bandmate and friend Ian Nash, who also played guitar for Grimmett, in 2009.

While with EDEN'S CURSE and supporting STRATOVARIOUS and FIREWIND in May 2009 on their U.K. tour, Pete and then-FIREWIND drummer Mark Cross became close friends and discussed the idea of forming a new band, only this time with Newdeck as the lead singer.

Newdeck's vocal abilities were truly convincing and in the spring of 2010, Pontus Egberg, bass player for Swedish hard rockers THE POODLES, completed the lineup.

Newdeck, Nash, Cross and Egberg recorded the TAINTED NATION debut album in the U.K. and mixed and mastered it in Germany under the supervision of Dennis Ward, producer of many successful international artists.

TAINTED NATION's music is described in a press release as "a commercial, modern and powerful-sounding rock mix."