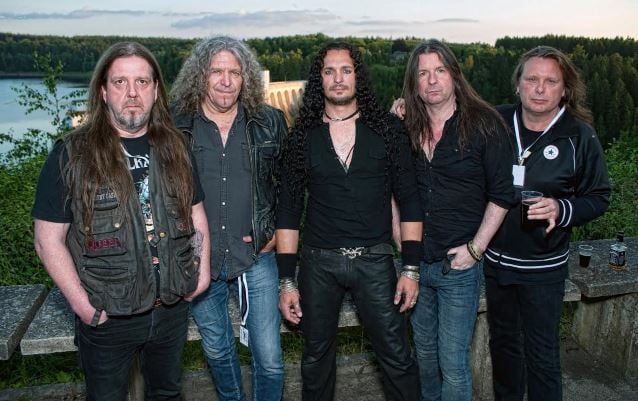 TANK To Enter Studio In November

British power metal mercenaries TANK are currently writing and rehearsing material for the follow-up to their successful 2012 album, "War Nation". The band is scheduled to enter the studio in November to begin recording the new CD for a tentative early February release. The new album's arrival will coincide with TANK's performance on the 2015 70,000 Tons Of Metal cruise in the Caribbean, where the band will debut the entire LP to the fans on board as well as play a second show of TANK classics from the past 30 years.

Joining guitarists Mick Tucker and Cliff Evans on TANK's new album will be former DRAGONFORCE frontman ZP Theart, who has been a member of TANK's touring lineup for the past two years. Also featured will be new recruits Bobby Schottkowski, formerly of SODOM, on drums, and current BLIND GUARDIAN member Barend Courbois on bass.

Says Tucker: "We recently completed our first tour of Brazil with this lineup and now we really want to capture the sound and energy of the band on record.

"Within seconds of first jamming together, we knew we had a great lineup that can once again stretch the boundaries of our particular style of metal.

"ZP, Bobby and Barend have given us a good kick in the ass and we can't wait to get into the studio and make some noise. And drink some beer."

Adds Evans: "Our last two albums we recorded with Doogie White ('War Machine', 'War Nation') were two of our most successful releases and proved to people that TANK is still a band at the cutting edge of metal and continually moving forward. We're not still stuck in the '80s.

"Working with Doogie was a real pleasure and we like to think that we have created a good body of work that will continue to be enjoyed by our fans around the world for years to come.

"Doogie has now moved on to front Michael Schenker's TEMPLE OF ROCK and will be heading out on tour soon. We wish him all the best.

"Now it's time to enter the next chapter of TANK and deliver another 'in-your-face' album of maximum metal."

TANK has also been confirmed for the 2015 edition of the Bang Your Head!!! festival in Germany, with other festival and tour dates to be announced soon.