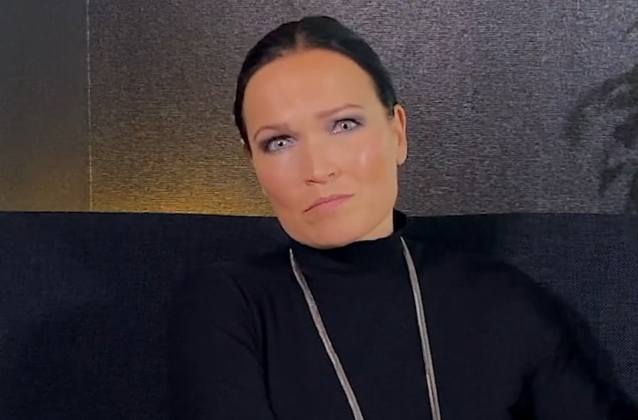 TARJA TURUNEN: 'I Carry Those Years With NIGHTWISH With Pride'

In a new interview with Barbara Caserta of Italy's Linea Rock, Tarja Turunen was asked if she takes it as a compliment when fans still bring up her work with NIGHTWISH and whether she feels restricted by fans' expectations when it comes to her solo work. She responded (see video below): "Actually, not. I don't feel [any musical limitations], because I feel completely free. I am free to express myself nowadays better than ever, actually, before.

"I carry those years with NIGHTWISH with pride," she continued. "I'm very proud of my work and what we did together. The music will always remain there in the books of history, and I don't feel at all bothered by the fact that [NIGHTWISH still gets brought up by fans in connection with my career].

"I'm very proud of my beginning in rock, and it gave me the [tools] to continue on my own, and also gave me the freedom to express myself and open my arms to fly, and to try other things.

"I don't feel that pressure from my audience at all," Tarja reiterated. "I know that I am challenging them with my music every time I'm releasing my records, because they are not the most common kind of rock records you could think of. If you listen to my last record, there are songs without any drums, guitar and bass. There are songs with a symphonic orchestra and my voice. And yes, I do different kinds of things, because that's who I am. But the fans that really know me, they are very open-minded people, and they have embraced me.

"And so, yeah, I don't have any boundaries or frontiers in music, and I don't give a [mouths the word 'fuck'] about it. [Laughs]"

NIGHTWISH keyboardist/leader Tuomas Holopainen later called the decision to part ways with Turunen "the most difficult thing I ever had to do." For her part, Tarja said the way she was kicked out of the group proved that her former bandmates were not her friends. "Maybe one day I'll forgive, but I will never forget," she said.

"I know a lot of fans would love to see something happen, but it's a very long distance away," she told Kerrang! magazine. "Personally, I don't see anything happening with me and them, to be perfectly honest. Marco came a little later into the band; he wasn't there since the beginning. He was always a guy I was close to. Me and Tuomas Holopainen, however, haven't seen each other in a long time… but we have been in touch. It's not bad. The past is what it is; we can't change that. We can only change the future."