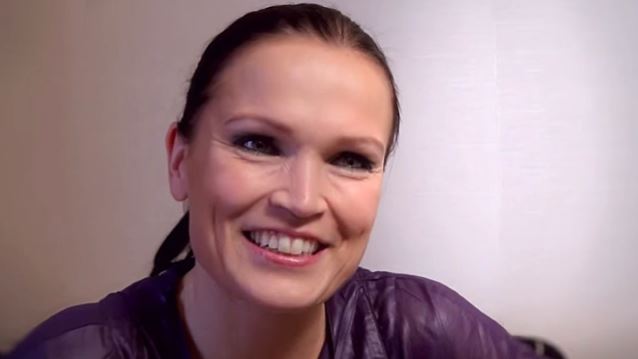 Finnish singer Tarja Turunen says that her involvement with NIGHTWISH was "a very, very important part of [her] musical history" but insists that she has established her own audience which has passionately embraced her musical output since she was unceremoniously fired from the group nine years ago.

Asked if the fact that at some of her recent solo concerts she has only played three songs from her NIGHTWISH days means that she would like to separate her past from her artistic present, Tarja told Greece's Metalpaths (hear audio below): "Actually, I play only one song [from NIGHTWISH] or [sometimes] no song [at all]."

"It's very hypothetical to think where I would be if I wouldn't have chosen to sing [on] that first demo that was offered to me. But, on the other hand, I have a life of my own.

Turunen added: "In my live set, of course I play songs… Now I'm going to present my new album for you [when I come to Greece] and also play some songs from my previous albums.

Asked if she has checked out the two NIGHTWISH albums that were recorded after she was dismissed from the band and what her thoughts were on what she heard, Turunen said: "I haven't been listening to their albums. Sorry. I haven't been interested in listening to their albums. I don't know the music. I heard some songs on the radio. Like, sometimes if I was in Finland, I heard their singles or something like that on the radio, but that's all I know. I mean, I haven't been interested in looking for that."

Dutch singer Floor Jansen made her live debut as the frontwoman of NIGHTWISH on October 1, 2012 at Showbox Sodo in Seattle, Washington following the abrupt departure of the band's lead singer of five years, Anette Olzon.