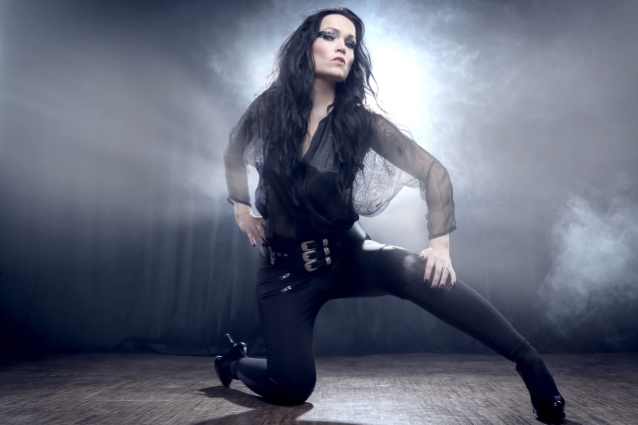 Former NIGHTWISH vocalist Tarja Turunen recently spoke with Bloodlines about her new live release, "Act II". The full conversation can be viewed below. A few excerpts follow (as transcribed by BLABBERMOUTH.NET).

Tarja: "You might think that working on a production for a live album wouldn't take that much time for an artist, but for me, working on a live record is as important as my work for a studio record. It is important because it actually is showing... the place I am at the moment artistic-wise in the world of music, but also for my audiences that haven't been there — the one that hasn't been in my concert yet, or the one that has been in my concert yet, where I'm at. I had this opportunity to make this very intimate London show. It was [an] incredible experience. You never get to perform in that kind of thing, if it's not your brother's birthday party with the family. I don't do that kind of thing naturally, so it was a very special and very emotional experience to sing for the hardcore fans that were just right in front of me, breathing the same breaths I was taking [in] the same little tiny room. Then, to work on Woodstock for a half-million people in front of you... That 'Act II' live record includes eight hours and a half of material when it comes to music and material, so you just can imagine how much editing I had to do and go through the material. That took [the] longest time. I was working [on a] daily basis for over six months on this record at home. [I worked with a] great, talented team of people — I was never left alone — but the end word was mine. There are artists probably that don't really work on the productions like I do. I am there — in every process, I am present, because I want to be, I need to be. I breathe for that. It's my art. 'Act II', I wanted to make it in an arty way so that you can have that experience by being in your living room [and] experience the emotions that are involved in a live concert."

Tarja: "It has been difficult for me to come over as a solo artist carrying all the responsibility on my own. I'm carrying a big crew of people with me, and it's not easy to cross the continent in general. I've had the time of my life on this whole tour... I'm really grateful that all my fans, they've been very supporting and really loyal to me through all these years. I get that support and I appreciate that very much."

On what inspires her:

Tarja: "Everything that I have experienced in my journeys, in general, everything that I write in my music, they have something to do with my life. It's just natural that way. Maybe I would be able to write a song from a perspective that wouldn't touch me personally, but it wouldn't be real for me. I need to have that kind of soul-ness in it, when I'm writing songs... It's very important to carry all that experience inside of me, because they make me who I am today. I wouldn't be the same person without going along that long journey that I've done... My life is about organizing it properly. When I'm an artist that works at home, I'm also a mother of a 6-year-old. It's a 24-hour job. Where to separate the family life from the artistic life? They are very united in my life in general, because when I'm at home, I don't want to go anywhere. It's my haven — I work at home, I record at home, I prepare my songs at home. Everything is happening at home, so I'm very blessed to have a place where I can feel free to create my own art when I am there. I really do enjoy my freedom I'm having today."

On whether she's started working on a new album:

Tarja: "I can't tell you too much about it, but definitely, I've been writing songs. I've been writing plenty of songs, actually — I have more songs than needed for the album itself. I'm working on the lyrics at the moment. I feel that the album is pretty much darker than the previous one, even a bit heavier maybe. Nevertheless, never forgetting the symphonic side of mine, as my first love of music was classical music, so I will never get away from that."

On her experiences as a female vocalist in metal:

Tarja: "I've always been very respected as a female singer in metal, or in general as a female singer. I've always enjoyed the respect from my male colleagues or my audiences all over the world. I've never suffered by the fact of being a woman on the road. Maybe the first couple of years were tough for me trying just to keep yourself sane in all this madness going around, and again, [to] keep yourself healthy, which for my type of singer, is absolutely the most important thing, because my vocals are pure, they are clean. I need to really take good care of my instrument, which is my body, so that requires a lot of work. When you are touring, it's tough, but talking about the respect, I have never needed to show more than I have. Maybe because the voice I have is powerful enough in a way for people to embrace me. I don't know the reasons for that. Maybe the other reason might be that I have always been very true to the metal world, true to the classical world. I have never had them colliding in my life. People that have had the classical education or the teachers that I have been working with in my past, they've always been respecting me because I've been true to them. I've always been very clear what I'm doing, how I'm doing, working hard. That has required me to work very hard, but when you do your job good enough, there is no words needed — they can see the results. I'm super-proud that they're so many girls around. I've been honored to talk with many of these girls seeing me as their role model. It's incredible how much beauty exists in the world of music and how many artists you can really inspire with your own work... When I sit down to write a song, I do not think about any of that. I do the songs for myself. I write a song for myself because I need to come out with that particular song. It's for me, and then, after I've produced a record and put it out, if someone finds that song of mine important, it's just [an] unbelievable gift."

Tarja's most recent studio album, "The Shadow Self", was released in 2016. Her new LP is expected to be released next year.

"Act II" — filmed during Tarja's world tour "The Shadow Shows", during which the vocalist circled the world 7.5 times with over 300,000 km traveled and played over 200 shows in 40 countries in front of one million people — was released on July 27 on earMUSIC as 2CD digipak, 3LP gatefold (180g, black), DVD, Blu-ray, limited mediabook 2CD+2BD (including two full live shows filmed at Hellfest in France and Woodstock festival in Poland as bonus) and digital.