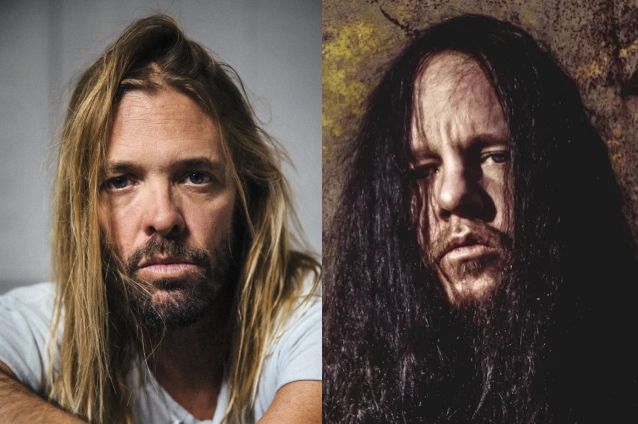 FOO FIGHTERS drummer Taylor Hawkins, who passed away at 50 a little over a week ago, was honored during the televised portion of the Grammy Awards ceremony's "In Memoriam" segment.

"This was the moment in the show when I was supposed to be introducing the FOO FIGHTERS," host Trevor Noah announced before launching an extended intro tribute to the beloved rock musician. "We would have been celebrating with them as they won three Grammy Awards earlier today. But they, of course, are not here due to the passing of their legendary drummer, Taylor Hawkins. Our thoughts go out to Taylor's family, his friends, his FOO FIGHTER family and all his fans."

Many hard rock and heavy metal fans took to Twitter to air out their frustrations with the Grammy Awards, who failed to recognize SLIPKNOT drummer Joey Jordison, CINDERELLA guitarist Jeff LaBar, Megaforce Records co-founders Jon and Marsha Zazula, and THE MOODY BLUES co-founder Graeme Edge of in the televised portion of "In Memoriam". However, the Recording Academy didn't completely forget about Jordison, the Zazulas, LaBar and Edge as they were listed — along with several hundred other musicians and folks important to the industry — on the Grammy.com web site under the "The Recording Academy Remembers The Music People We've Lost: Grammy In Memoriam" section.

The 64th Grammy Awards took place Sunday, April 3, at the MGM Grand Garden Arena in Las Vegas and were broadcast live on CBS.

A list of musicians honored during the televised portion of the Grammy Awards 2022 ceremony's "In Memoriam" segment:

Grammy Awards 2022's complete list of musicians and folks important to the industry whom we've lost in the past year and a half — including Jordison, the Zazulas, LaBar, Edge, CHILDREN OF BODOM leader Alexi Laiho, former TROUBLE singer Eric Wagner and METAL CHURCH vocalist Mike Howe — can be found on Grammy.com.

FOO FIGHTERS were supposed to play at this year's Grammy Awards but canceled the performance following Hawkins's death.

FOO FIGHTERS' Grammy cancelation came days after the band officially scrapped all of its previously announced shows, explaining that they were taking "this time to grieve, to heal, to pull our loved ones close, and to appreciate all the music and memories we've made together."

Hawkins died at a hotel in Bogota, Colombia on March 25. Local officials said an ambulance was sent to the hotel after a man reported having chest pains. The 50-year-old FOO FIGHTERS drummer did not respond to resuscitation efforts and was declared dead, the city's health department said.

Jordison died "peacefully in his sleep" last July of an unspecified cause. He was 46 years old.