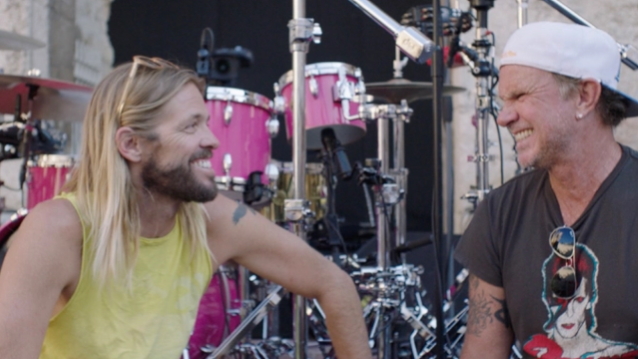 RED HOT CHILI PEPPERS' Chad Smith has shared a tribute video to FOO FIGHTERS drummer Taylor Hawkins, who died a week ago at the age of 50.

The two-minute compilation video, soundtracked by FOO FIGHTERS' "My Hero" and put together by Daniel Catullo who directed the 2017 "Foo Fighters At The Acropolis" series on PBS that Smith hosted, features images of the two drummers over the years, including many moments on the road.

"Taylor's my good buddy who I've known forever," Smith says in an interview clip at the beginning of the video. The video ends with Smith's tribute to Hawkins during the RED HOT CHILI PEPPERS' Hollywood Walk of Fame ceremony on March 31. "I have to give a shoutout to my brother Taylor Hawkins. I love you, Taylor," Smith said in his speech. "He would laugh and make a smartass comment about this whole thing."

You can watch Smith's tribute to Hawkins below (courtesy of Variety).