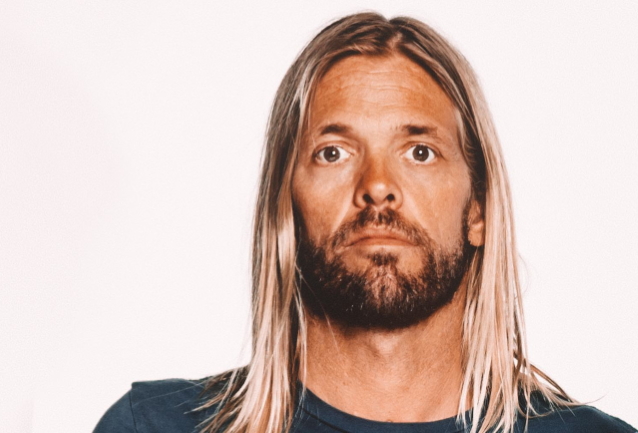 "Nobody can do it like Neil, man," Taylor said (hear audio below). "There can never be another Neil Peart. No way. He had the craziest hands, and he just had such a unique thing.

"I hope that Geddy and Al play together, and I hope they can find someone to do something with them," he continued. "But no one will ever be Neil Peart; it's just impossible. And I think Geddy and Alex know that, and they feel the same way. But I want them to play — I really, really do. I know they wanna play." He then quickly clarified: "I don't know that, like, personally, but…"

Asked if he thinks a hypothetical new Lee-Lifeson project would sound like RUSH, Taylor said: "Those are their songs. It would obviously be somewhat in the same style as RUSH, I would imagine. But I think that they would, instead of trying to get a copy of Neil Peart, probably try a different sort of style. But I don't know. Who knows? Who knows if they'll ever even do it? Maybe they've been done long enough where now they're just, like, 'It's kind of nice just to be home and chill.' … They did it for so long.

"But I know they'll wanna play on some level — I know they will," Hawkins reiterated "Geddy is such a player; he's such a musician. He's a musician's musician. And so is Alex. But I don't know Alex as well as I know Geddy. And I don't know Geddy that well. But just the few times I've gotten to really hang with him, he's a really funny guy. He's got a really dark sense of humor that you would never expect. But he's a smartass. I love it."

Hawkins and his FOO FIGHTERS bandmate Dave Grohl inducted RUSH into the Rock And Roll Hall Of Fame in 2013 and also performed "2112 Overture" with producer Nick Raskulinecz while dressed in up like RUSH circa 1976, complete with wigs, platform shoes and kimonos.

Back in 2016, Hawkins said that he would "get crucified" if he tried to replace Peart in RUSH after the legendary drummer made it clear he wasn't interested in touring anymore.

"Dude, I'd get fucking crucified, man," he said during an appearance on SiriusXM's "Trunk Nation With Eddie Trunk". "You know how many fucking dorks would wanna kick my ass if I tried to be in RUSH? It'd be like a nation of dorks chasing me and trying to kill me. [Screaming] You're not Neil Peart! Don't even think about it!"

During his RUSH Rock Hall induction speech, Taylor praised Peart, saying: "His drumming was just as musical and melodic as anything in the band. Bringing the drums where they should be, the forefront of the band. Not only did he did the most ripping drum solos in the world, he also wrote the lyrics."