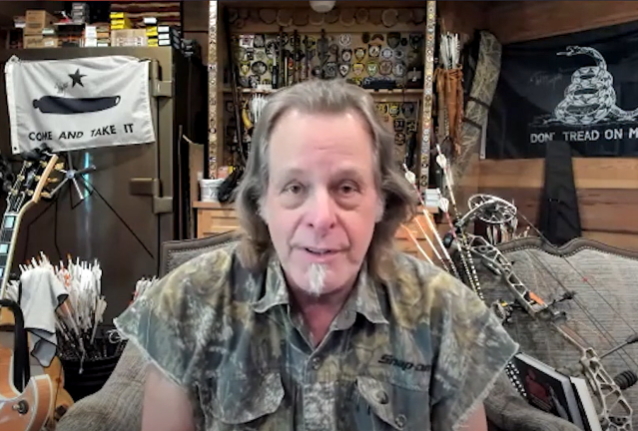 TED NUGENT Defends Draft Opinion That Would Overturn Roe v. Wade: 'It's Not About Banning Abortions'

A week after Politico published the opinion, the outspoken conservative rocker addressed the prospect of SCOTUS overturning Roe during today's (Monday, May 9) edition of "The Nightly Nuge", a news-style clip in which Ted offers his take on the news of our world.

He said (as transcribed by BLABBERMOUTH.NET): "Well, number one, we don't have to look far anytime, any day in these treacherous times in America that those that are against the right to life — that's really what it all boils down to, doesn't it? And as we celebrate Mother's Day, I think it has a lot to do with maternal instincts, responsibilities and morality.

"So those that misinter… Well, I was gonna use the term 'misinterpret,' but that's much too generous. It's just like the 'Don't Say Gay' bill that had nothing to do with that. It's just like the 'Black Lives Matter' terrorists that really, clearly, by all evidence, don't care about black lives. And those that are attacking this recent…

"There's two issues: the leak is a crime and somebody needs to be brought to justice; but two, the leak wasn't about ending Roe v. Wade; it was about taking a step back and identifying that the court didn't have the legal authority to determine that 50 years ago," he continued. "And meanwhile, everybody's screaming that abortions are now banned.

"These are the maniac days of dishonesty, and it's manifested by fact checkers who are allergic to facts. Facts, truth, logic and common sense is Kryptonite to the left.

"So, good Americans must organize, and we must stand up and make sure that we let our elected employees and our friends and neighbors and people at church and school and work and around the campfire know that the megaphone of the media is one big toxic lie."

Circling back to the draft opinion that could lead to a reversal of Roe, Ted said: "It didn't ban abortions; it's just reviewing that the last legal consideration was unconstitutional. We've gotta get back to the Constitution. So I'm a big constitutionalist guy.

"So we need to find out who the leaker was and bring them to trial. And we need to try to get past the lies of the left that it's not about banning abortions; it's about reviewing the Roe v. Wade decision."