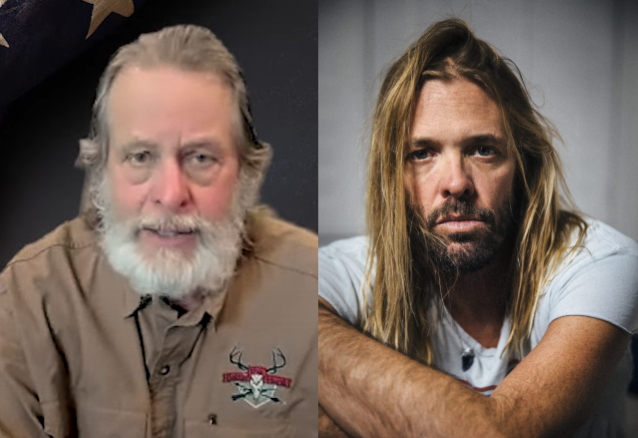 TED NUGENT Defends His Comments About TAYLOR HAWKINS's Death, Says He Was 'Being Compassionate And Empathetic'

Outspoken conservative rocker Ted Nugent has defended his comments about the passing of FOO FIGHTERS drummer Taylor Hawkins, explaining he was simply "being compassionate and empathetic and supportive."

During last Friday's (April 1) edition of "The Nightly Nuge", a news-style clip in which Ted offers his take on the news of our world every night, he reflected on Hawkins's death, saying: "It's heartbreaking on so many levels. Fifty years old with a horrible, long-term celebration of substance abuse. I'm not… Well, I am casting judgment because substance abuse is selfish. His wife and daughter, they should have been taken into consideration. Is spending time with your wife and daughter more important than getting high or less important than getting high?

"I've told the story many times, but I've witnessed it," Nugent continued. "My bass player Greg Arama — so gifted at 15; listen to the bass part on 'Journey To The Center Of The Mind' by the AMBOY DUKES — and the guy was just a gifted, a virtuoso, a savant of groove and musicality. And he started smoking dope and ended up with heroin and died when he was — I don't know — early 20s. And the future he could have had. I told Jimi Hendrix, I said, 'No, I don't want your dope, and it's gonna kill you, Jimi.' Bon Scott [AC/DC] would come to the studio when my band was recording 'Weekend Warriors' [1978] out of Miami and AC/DC was coming in [and working on] 'Highway To Hell' — just phenomenal musical powers. And he'd come in drunk every day with a [bottle of] Jack Daniel's or an Old Grand-Dad [whiskey] and he'd go, 'Hey, Teddy, try some of this.' And he smelled like a diaper. What a talent. What a nice guy. These were all nice guys.

"But what happens is the music can be so overwhelming, the delivery of your comedy or your art or your dream, it can be so obsessive that it's hard to get rid of it. You know how with just a guy that doesn't make music, sometimes it's hard to get a song out of your head? Well, think of how difficult it is for those of us that make the art. And if they don't have a bow and arrow — and a lot of people will dismiss this as being just absolutely too simple, but it's not; it's perfectly simple — if you're so obsessed with delivering your art that you can't escape it, they think drugs and alcohol with help. It only makes it worse.

"So, if you loved Taylor Hawkins — I loved him; I loved the man; I still love him," Ted insisted. "But I love his wife and daughter more. Because they didn't break his heart; he broke their heart.

"So, God rest Taylor Hawkins's soul and all those stoners and drunks that died prematurely. Thank God for every day you're above ground. Breathe deep, concentrate on the positive and show reverence for your gift of life and your sacred temple. Do not poison your sacred temple. It's that simple."

On Tuesday (April 5),Ted once again touched upon the subject of Taylor's passing while lamenting the fact that "The Nightly Nuge" keeps "getting labeled as 'hate speech'" by some. He said (as transcribed by BLABBERMOUTH.NET): "When the great drummer, and I understand he was a great, fun guy and a loving husband and a loving father, Taylor Hawkins of the FOO FIGHTERS, when he died, we did a tribute to him here on 'The Nightly Nuge', and I played a very emotional love song that had come out of me for my brother John when I lost him, showing great compassion, showing great empathy for the band, for his family, for his fans, showing nothing but love but identifying the intentional abuse of substances as being selfish. Well, the tsunami of attacks against me for being compassionate and empathetic and supportive and identifying a booger in someone's nose, labeled as 'hate speech,' it's unbelievable. If that speech wasn't 'love speech,' I don't know what would be love speech. But love speech sincerely and genuinely critiquing or even identifying something you disagree with or that is glar[ing]ly dangerous and irresponsible as hate speech, that's a manifestation of total cultural abandonment of the good will and decency and genuine support for your fellow man that you and I were raised in.

"So everybody out there, speak your mind, be a critical thinker, articulate yourself honestly, and if they call it 'hate speech,' they're the haters," Nugent added. "Those who accuse us of hate speech are the real haters. And I couldn't be more confident of that."

"So what's the difference between a person that falls for that versus a person who defies that? I haven't the faintest idea," he admitted. "Because I think God gave all of us everything we need.

"Some people look for an easy way out, and some people don't. I didn't. I think it was just shit luck. 'Cause my brothers and sisters smoked and drank, and they didn't even surround themselves with goofball rock and roll dirtbags. I did."

Ted went on to say that most of his influences "got high — right in front of me. And I admired the living shit out of 'em," he said. "The MC5, they were all stumbling, puking, stupid drunk and stoned, and I admired them beyond description. But then it caught up with them, and I said, 'Oh.' Thank God I didn't go, 'Hey, they're smoking a lot of hashish, and they're just kicking out the jams. Maybe I'll try the hashish.' And luckily, I didn't. Luckily, I watched them blow up. I watched the drugs and alcohol destroy the energy that I admired, destroy the groove that I admired. And to this day, Wayne Kramer is a dear friend of mine. Wayne, I love you, buddy. And he knows I love him. And we have great conversations. And he's probably polar opposite of my ideologies. But not really, because he has a work ethic, and he's a family guy, he's a loving guy, he's a productive guy, he's a conscientious guy, he's a caring guy. But I think to this day, he thinks that dope is essential… I don't wanna presume — I had a conversation with him not that long ago where we disagreed on the use of marijuana and other intoxicants, or whatever category you wanna put 'em in.

"The point is that lucky me, I could differentiate between the delivery of the things I admired versus the occasional and, more often than not, conduct of those that I admired," Ted added.

Back in 2018, Nugent said that Canada was "absolutely crazy" for its decision to legalize marijuana, explaining that he has "never seen one moment of positive outcome from someone getting high." He said: "I'm all for medical marijuana, I'm all for medical anything, as long as it's really beneficial to people suffering from health issues, but to legalize recreational comfortably numb is a guaranteed script for ruined lives."