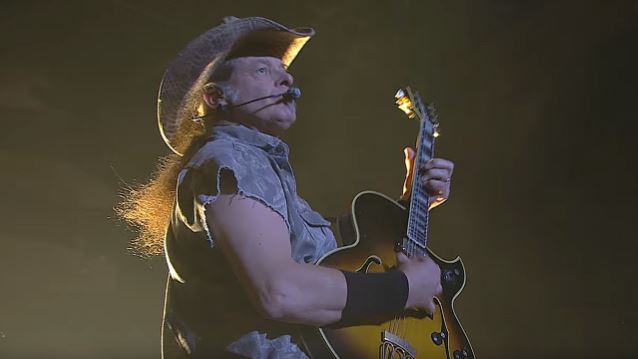 TED NUGENT: 'DONALD TRUMP Is The Hellraiser America Has Needed For A Very Long Time'

It's still early days in the 2016 presidential race, but outspoken conservative rocker Ted Nugent appears to have thrown his support behind Republican frontrunner Donald Trump.

In a new Facebook post, Nugent writes: "Donald Trump is the hellraiser America has needed for a very long time. He and Ted Cruz may be the only hope to end the criminal jihad on America by our own corrupt punkass government, media and bigBiz goons. Are there enough Americans smart enough to end the nightmare? It is up to us, WE THE PEOPLE to make certain everyone in our lives is awakened to their WE THE PEOPLE responsibilities and stop the America hating devil democrats. MAKE IT HAPPEN!"

Nugent also attached an entire article written last month by the conservative pundit William Bennett, which wondered what would happen in a Trump presidency.

Nugent in 2014 apologized for referring to President Barack Obama as a "subhuman mongrel," calling that word grouping "street-fighter terminology" and saying he wished he used "more understandable language," such as "violator of his oath to the Constitution."

Know it, Donald Trump is the hellraiser America has needed for a very longtime. He & Ted Cruz may be the only hope to...