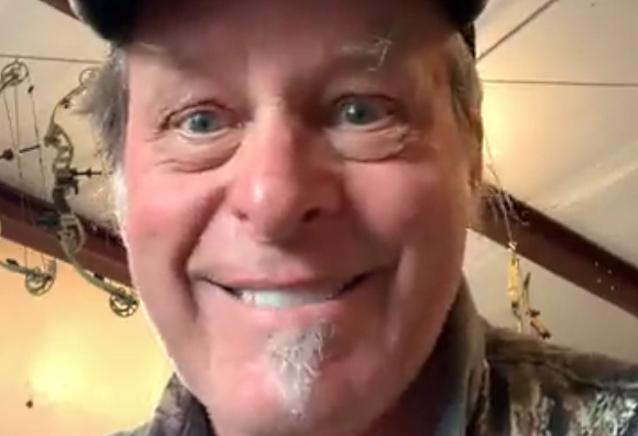 Ted Nugent has hit out at the decision to allow transgender weightlifter Laurel Hubbard to compete in the Olympics.

According to Yahoo Sports, the 43-year-old Hubbard had previously competed in men's weightlifting competitions before transitioning in 2013. She has reportedly been eligible to compete in the Olympics since 2015, when the International Olympic Committee issued guidelines allowing transgender athletes to compete as a woman as long as their testosterone levels are below 10 nanomoles per liter for at least 12 months before competing. Weightlifting's international federation follows these guidelines, and Hubbard is playing by the rules.

Nugent addressed the hot-button issue during a Facebook Live session earlier today (Monday, May 17). He said (as transcribed by BLABBERMOUTH.NET): "I heard the story of the world record holder weight-lifting champion which was born a man was allowed to compete against women. See, there's a manifestation of a cultural abandonment the likes of which I don't think we've ever seen before — where a man gets to go, 'I feel like a woman so I'm gonna compete against the women.' Then they set world records in athletic events because they're a man competing with women. And some dirtbag would go, 'Yeah, that's perfectly legitimate. That makes perfect sense.' Because women can't lift as much as men, so the man who claims he's a woman — he's not a woman; the penis might be an indicator. And he sets world records in athletic competitions where a man is competing against women. And some mindless dirtbag goes, 'Well, that's legitimate. That's good.'

Nugent is not the only person to express his dissatisfaction over Hubbard taking part in women's competitions. Earlier this month, former Olympic weightlifter Tracey Lambrechs told TVNZ: "I'm quite disappointed for the female athlete who will lose out on that spot. We're all about equality for women in sport but right now that equality is being taken away from us. I've had female weightlifters come up to me and say, 'What do we do? This isn't fair. What do we do?' Unfortunately, there's nothing we can do, because every time we voice it, we get told to be quiet."

Caitlyn Jenner, who competed in the 1976 Olympics decathlon as Bruce Jenner, recently declared her opposition to transgender girls competing in girls sports, telling TMZ that it "isn't fair. That's why I oppose biological boys who are trans competing in girls sports in school. It just isn't fair, and we have to protect girls' sports in our schools."

Hubbard previously won a silver in the women's superheavyweight category at the 2017 World Championships.

The original International Olympic Committee guidelines for transgender athletes created earlier this century included the condition that they must have undergone sex reassignment surgery.