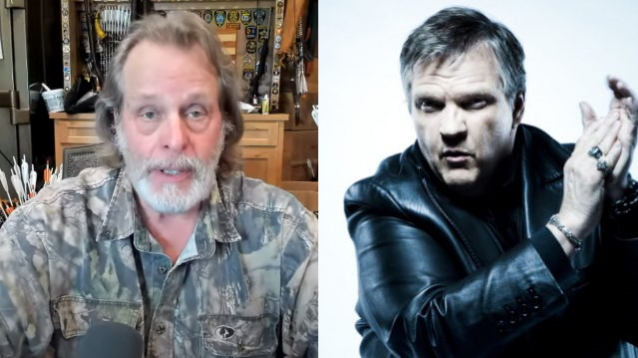 TED NUGENT On MEAT LOAF: 'He Was A Defiant Son Of A Bitch, And I Love Him For That'

During a recent appearance on "The Joe Piscopo Show", Ted Nugent paid tribute to iconic rock singer Meat Loaf, who died on January 20 at the age of 74. He said (as transcribed by BLABBERMOUTH.NET): "This guy was so gifted. And more important than that, he was a funny son of a bitch. He was such a shining light of just good will and decency and the work ethic. I cannot rave enough about what Meat Loaf epitomized for life, liberty and pursuit of rock and roll happiness. What a driving force of nature he was."

Speaking about his memories of his collaboration with Meat Loaf on 1976's "Free For All" album, Ted said: "I have a flood, a tsunami, a bombardment of incredible, funny, outrageous, bellyaching laughter moments. 'Cause if you're not having fun with me, you're weird. And everybody, especially Meat Loaf… He spent enough time in Detroit to learn the importance of cockiness, and he was very good at his cockiness. He was right up there with you and me, Joe. But every day in the studio… Number one, because we were all clean and sober, so our humor, our laughter, our passion, our work ethic was united to deliver the ultimate musical performance. So between me and Meat Loaf and [producer] Tom Werman and everybody in our team, it was an absolute orgy of laughter. But once the recording button was hit, it was serious, serious business without losing the sense of humor and the passion and the outrageousness, and, more important, the defiance. What defines Meat Loaf's best music? He was a defiant son of a bitch, and I love him for that. And that will always be with us."

According to TMZ, Meat Loaf was "seriously ill" with COVID-19 just days before his death. The singer was due to attend a business dinner earlier this week for a show he was working on based on his classic hit "I'd Do Anything For Love" but canceled after becoming sick.

Meat Loaf had reportedly been outspoken about vaccine mandates. In May, he posted a clip of Eric Clapton and Van Morrison's anti-lockdown song "Stand & Deliver", writing, "Listen and Learn." He also reportedly told a fan in a Cameo video three weeks ago that he recently had an endoscopy and complained about seemingly endless lockdowns and restrictions, telling the fan: "COVID's a drag, but you can blame China."

In one of his last interviews, Meat Loaf appeared to be losing patience with pandemic measures. Speaking to the Pittsburgh Post-Gazette in August, Meat Loaf said: "I understood stopping life for a little while, but they cannot continue to stop life because of politics. And right now they're stopping because of politics." He also claimed that masks are "useless" and a "nuisance" that only "make your nose itch and make it so you can't breathe." He complained about being asked to wear a mask on a plane and said, "If I die, I die, but I'm not going to be controlled."