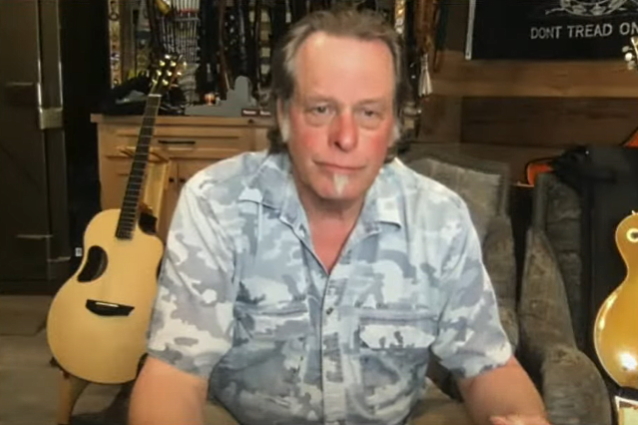 TED NUGENT Opens Up About His COVID-19 Battle: 'I've Never Been So Scared In All My Life'

Ted Nugent has opened up about the darkest days of his battle with COVID-19, saying that he had "never been so scared" in his entire life.

A week after publicly revealing that he had tested positive for the novel coronavirus, the outspoken conservative rocker discussed his experience during an episode of his "Ted Nugent's Spirit Campfire" Internet show.

The 72-year-old pro-gun activist, who had previously the virus was "not a real pandemic," told his co-host John Brenkus (as transcribed by BLABBERMOUTH.NET): "I never am a sympathy guy. I'm a tough guy. I'd rather err on the side of 'tough guy.' Five [or] six days ago, it was really scary. I didn't think I was gonna make it. I literally couldn't function for about 20 hours, and then they came and they rescued me… I've never been so scared in all my life.

"I've had the flu three or four times in my life," he continued. "I'm in bed and I'm giving birth to swampage — I mean, I go through six boxes of Kleenex an hour. Okay, that's the flu, and you've got a headache and you've got body aches. Maybe you've got some diarrhea, and just overall pain.

"I don't struggle to express myself. The six-foot-two, 225-pound headache [this time] was like nothing I have ever experienced. I mean, from my tip of my toes to the top of my hair, I literally was dizzy and weak and struggled to get up to go to the bathroom. And I would lay in the bathtub a couple of times a day with the water as hot as I could take it just to divert."

Last week, Ted said that he was being treated for COVID-19 by a group of doctors who made a video last July calling for the use of the malaria drug hydroxychloroquine to battle the novel coronavirus, despite warnings from public health experts. Nugent also detailed his clinical management of COVID-19, saying he has been taking hydroxychloroquine and ivermectin, an antiparasitic drug used to treat several neglected tropical diseases in humans and also used in veterinary medicine.

In the past, Nugent, a staunch Trump supporter, had referred to the virus as a "leftist scam to destroy" America's 45th president. He had also repeated a narrative pushed by conservative media and disputed by health experts that suggests the official death count from the coronavirus is inflated.