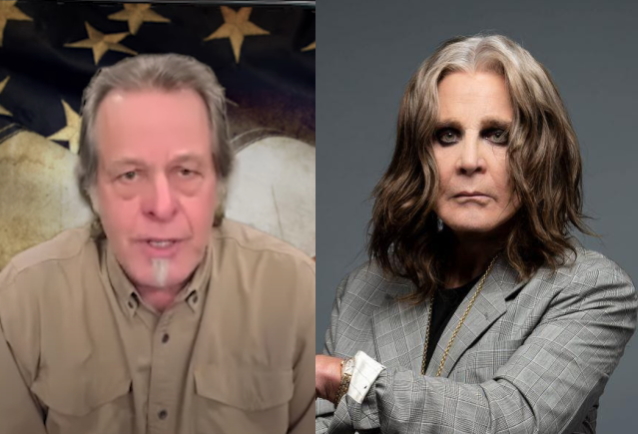 Ted Nugent has weighed in on Ozzy Osbourne's recent decision to return to the United Kingdom after spending more than 20 years living in Los Angeles.

Last week, Ozzy told the Observer that gun violence in the U.S. is part of what convinced him to return to the U.K. full-time.

"I'm fed up with people getting killed every day," he said of American gun violence. "God knows how many people have been shot in school shootings. And there was that mass shooting in Vegas at that concert ... it's fucking crazy."

Nugent addressed Ozzy's comments during the latest edition of "The Nightly Nuge", a news-style clip in which he offers his take on the news of our world. Asked by co-host Keith Mark about a recent news report that Los Angeles voters will decide on a proposal in 2024 on whether hotels will have to offer vacant rooms to people experiencing homelessness, Ted said in part (as transcribed by BLABBERMOUTH.NET): "Even my friend Ozzy Osbourne is getting the hell out of Los Angeles because he'd rather live in a tyrant England than in a shooting zone that is orchestrated — a shooting zone, a murder capital that is orchestrated by the court system, the district attorney, the prosecuting attorneys of L.A. county.

"[My wife] Shemane and I, we have the time of our lives when we go to Los Angeles. I haven't been there in a number of years because I just don't go to hellholes," Ted continued. "I just don't go to high-crime murder zones where you have to sidestep feces and needles in the streets and you see people defecating right there on the sidewalk. And I don't mean rarely — I mean it's becoming standard operating procedure.

"So it's another manifestation of a cultural abandonment, cultural deprivation that is orchestrated glaringly obviously by the Democrat party and all their cronies," Ted added. "This is a left-wing, socialist, mindless Satanic agenda that celebrates indecency, cruelty, crime, dangerous conditions. They celebrate dangerous conditions while the best of the best are now abandoning California and New York and Illinois and New Jersey. Good hard-working, conscientious, moral families that are in the asset column of those jurisdictions, they're leaving. People are moving to Texas and to South Dakota under the great [governor] Kristi Noem. The good families of conscience, God, family, country, Constitution, Bill Of Rights, Ten Commandments, Golden Rule, work ethic, law and order, that quality of life mantra is guiding conscientious families to get the hell out of the feces, needles, exploding violent crime rates and now where their tax dollars are gonna be torched even further and they're gonna house homeless, dangerous, most of them paroled, dangerous criminals into hotel rooms at our expense. Just like the insanity of me having to pay for some guy that smokes dope and snorts cocaine and drinks Starbucks and has piercings and tattoos, I've gotta pay for his student loan? It's 'Planet Of The Apes' out there."

There have been more than 440 mass shootings in the U.S. in 2022, according to the Gun Violence Archive.

In the first half of 2020, there were 181 homicides recorded by the Los Angeles Police Department, compared to 180 in the first six months of 2021. The increase in homicides is largely linked to gun violence.

Ozzy's wife Sharon Osbourne told the Observer that "America has changed so drastically" and said there's "nothing united about it."

Ozzy gave a different reason for wanting to leave Los Angeles to the Mirror earlier this year. In March, Osbourne said that "the tax is getting too much" and that he didn't want to continue paying current taxes to stay in the U.S.

This past June, Ted, a former board member of the National Rifle Association and longtime opponent of gun control, dismissed efforts to tighten gun laws, suggesting that "commandos" inside of schools could be a better way to combat mass shootings.