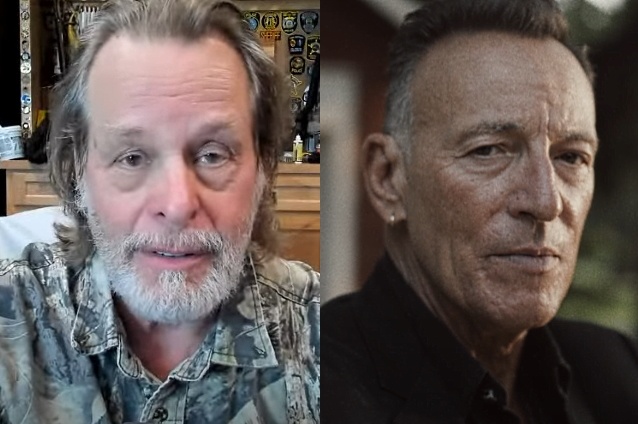 Springsteen can best be described as Nugent's political polar opposite, having been a vocal opponent to former U.S. president Donald Trump on many occasions. In August 2020, Bruce went as far as to allow the use of his song "The Rising" in a video that aired during night one of the Democratic National Convention.

Ted, who is widely considered to be one of the most politically conservative musicians in rock, weighed in on The Boss during an appearance on the January 18 episode of "That Jamieson Show". He said (as transcribed by BLABBERMOUTH.NET): "You couldn't get further apart ideologically, politically or truth, logic and common sense-wise than me and Bruce Springsteen, but here I'll show a little love for Bruce. I've been able to perform on the 'Conan' show with [Bruce's] E STREET BAND, which is one of the greatest joys of my life. I've always been surrounded by the best musicians, and that's the perfect example. We played 'Jenny Take A Ride' by Mitch Ryder, and Max [Weinberg] and the guys performed it with unbelievable accuracy and perfection and soulfulness. So I give him that salute for having that quality of virtuosos that deliver his music."

He continued: "Instead of going after Bruce for being a dirtbag and supporting communists like [Joe] Biden and [Barack] Obama, people that ruined quality of life, especially for minorities — how he can't see that, I don't know. But I would like to salute Bruce Springsteen because he always supported Mitch Ryder and THE DETROIT WHEELS, a foundational, fortified A-10 Warthog of musical authority in all great bands' lives… And if nothing else, if I met Bruce, I wouldn't punch him. I always have Mike Tyson with me, and I give him a hundred bucks to punch assholes. And I wouldn't have Mike punch him. I would say, 'Mike, take a minute off. Go find some other asshole to punch.' But I'm gonna say 'thank you' to Bruce Springsteen because we share the reverence and the admiration for musical integrity, enthusiasm. And you have to admit Bruce's career is based on his musical heart and soul. The delivery and content of his lyrics I don't abide by most of the time, but I would thank him for his enriching lives with powerful music. I wouldn't go into his communist predilections. I would also thank him for doing a 9/11 tribute. So he's got some great, great spirit."

Nugent isn't the only conservative rocker who has been critical of Springsteen. Last year, Aaron Lewis released a single, "Am I The Only One", in which the STAIND frontman calls out Springsteen at the end of the track, singing: "Am I the only one who quits singin' along every time they play a Springsteen song."

Prior to the 2020 U.S. presidential election, Springsteen called on Americans to vote Trump out of office, saying: "A good portion of our fine country, to my eye, has been thoroughly hypnotized, brainwashed by a con man from Queens. You mix in some jingoism, some phony patriotism, fear of a black planet, vanity, narcissism, paranoia, conspiracy theories and a portion of our nation undergoing mass delusions and teetering on violence, and you're left with the greatest threat to democracy in my lifetime."

Two years ago, Springsteen was critical of the Republican party as a whole, telling The Altantic: "When you see the Democratic side of the House filled with brown people and black people, straight people and gay people, and then you look at the Republicans, who appear unchanged by history at this moment? They look ridiculous. And despite their current power, they look like a failing party.

"If you look at the long narrative, like a half century ago when I was 20 or in 1968, when I was 18, you would say there have been great improvements — the civil-rights movement, the Voting Rights Act, the Obama presidency," he continued. "Of course, there's a constant pushback to whatever progress gets made, by a reactionary element. But I feel that that’s smaller now than at any time in the past, and it's diminishing. It's folks who see themselves being left behind by history and losing status, and it's forces within the Republican Party and in society that are intent on keeping the power balance of the nation in one place, when that’s simply going to be impossible.

"So I would say there have been a lot of improvements, but obviously we have a long way to go," Bruce added. "There is the classic Martin Luther King quote: 'The arc of the moral universe is long, but it bends toward justice.' I still believe that. But it just does an awful lot of zigging and zagging along the way. And it feels way too slow for our current times."

Nugent, who recently resigned from the board of the National Rifle Association (NRA) after 26 years, has called Donald Trump "the greatest president in our lifetime." He also said the billionaire real estate mogul represents "the heart and soul of the best American families out there."