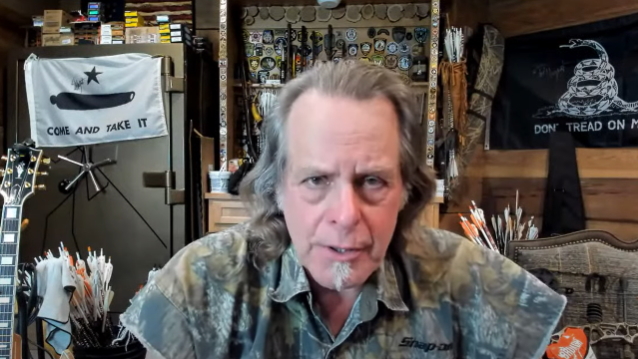 Ted Nugent has spoken out against calls for lawmakers to pass legislation designed to reduce gun violence, saying such bills largely target law-abiding gun owners and wouldn't curb violent crime or stem the illegal transport of guns from other states.

The 73-year-old, who recently resigned from the board of the National Rifle Association (NRA) after 26 years, made his comments in the wake of Tuesday's mass shooting in a Uvalde, Texas elementary school which resulted in the deaths of at least 19 children and two adults.

In his YouTube livestream on Tuesday, Ted condemned the massacre in Texas but joined other Republicans and conservative commentators who say the country has to address mental health issues.

"We are gonna absolutely condemn the evil, Satanic, demonic soullessness of a monster who would slaughter innocent children," Nugent said in part (as transcribed by BLABBERMOUTH.NET).

"And to those who think that we need more gun control, who could possibly be so heartless and stupid to think that someone committed to murdering innocent lives would give a rat's ass about another gun restriction, President Biden? How heartless. How soulless. How cruel. How dishonest."

Ted went on to cite Mexico's strict gun laws as an example of a situation where law-abiding citizens are defenseless. "Gun-free zones are the dream of evil people," Nugent said.

Addressing the suspect in Tuesday's massacre — a local high school student who officials said legally purchased two assault rifles and scores of ammo last week for his 18th birthday — Nugent said: "Now, we don't know all the horrific details of the Uvalde slaughter today. I happen to know what weapon it was and what caliber and I've been given a timeline of how it unfolded.

"I'm not gonna presume that this evil man was on the radar, though in every other instance they were on the radar and nobody did anything.

"Yeah, you have First Amendment rights, but when you say, 'I'm going to be a mass shooter and kill as many people as I can,' and if you're on record saying that, you need to be put in a cage under surveillance.' 'Well, I haven't done anything yet.' He's threatened to kill people."

As for what we can do to make it less likely that these kinds of tragedies happen again, Ted said: "Let your elected employees know that you're fed up with the division and that we want the basics for a safe and secure country: law and order, freedom, good over evil, self-defense. And we'd better going to arm teachers and train them and have real security in our schools. These children are the greatest responsibility we have and we have to keep them safe."

Tuesday's massacre came only 10 days after an 18-year-old gunman in body armor killed 10 shoppers and workers at a supermarket in a predominantly black area of Buffalo, New York.

In March 2021, Nugent threatened President Joe Biden and other Democrats, telling them to "come and take it" just hours before the House of Representatives passed two gun-safety bills.

In a March 11, 2021 Facebook post, Nugent addressed Biden and "all you other oath violating traitors," writing, "Google my address and itinerary and Come and Take It!" He also proclaimed, "If you want to play Concorde bridge again, you will be the British and I will be the Americans, again."

Last August, Nugent defended his right to bear arms under the Second Amendment, arguing that he "got it from God." The musician discussed his natural-born rights as an American while talking to Tucker Carlson for the newest episode of Fox Nation's "Tucker Carlson Today".

In a July 29, 2021 e-mail from NRA general counsel John Frazer sent to board members, it was announced that Nugent, who joined the board in 1995, was stepping down "due to ongoing schedule conflicts."