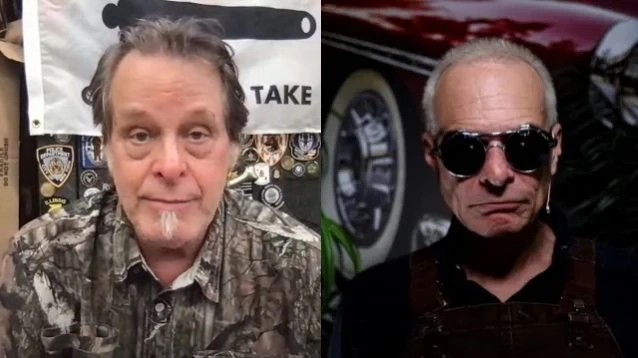 TED NUGENT Says He Couldn't Have A 'Meaningful' Conversation With DAVID LEE ROTH: 'The Guy Was Out Of His Mind'

In a new interview with Darren Paltrowitz, host of the "Paltrocast With Darren Paltrowitz", Ted Nugent was asked if ever had any interactions with legendary VAN HALEN singer David Lee Roth. He responded (as transcribed by BLABBERMOUTH.NET): "I did — a few times. And I admire and praise his entertainment gifts; he's a monster. Tell me that all that David Lee Roth music with VAN HALEN isn't a smile eruption in our life. I mean, what a fun, cocky, soulfy guy. He really does evoke, emulate and deliver touches of James Brown and Wilson Pickett and some Motown melodious grunt, and certainly the blues and the gospel and the rhythm and blues masters — you can hear that in David Lee Roth. I don't think he's ever been given credit for those talents and those musical capabilities that I just mentioned. So I'm glad I just mentioned them, because they should be attributed to him, 'cause he did deliver them with aplomb."

Ted continued: "I've always been militantly against substance abuse, and it's an absolute crime — literally and figuratively — and David's a perfect example. Again, I love him — I hope he's happy, I hope he's healthy. He seems to know what happiness and health is; God bless him. Thank you, David, for enriching our lives with your incredible music. God bless you. But tragically — and this goes to Eddie [Van Halen] too, and my encounters with Jimi Hendrix and so many people — you couldn't have a meaningful dialogue. It was all stoned disconnect, whereas when I sat down with B.B. King and when I sit down with Joe Perry and Steven Tyler, even though there were moments when it was hopeless — there were moments… And Sammy Hagar's a perfect example. We have a meaningful, man-to-man, human-to-human, fun, deep bullshit session, because he's in tune with himself — and he's real good at getting out of tune with himself. But my point is, I think it's important to note that the incredible amount of hours that I've been honored and humbled to spend with some of the most powerful music authorities in the world, there was nothing to be shared because they were drunk or stoned. All those moments reinforce my anger and hate for people who leave the world to drop out comfortably numb. They don't make anybody happy [when they do that]. They don't owe me happiness, but wouldn't it have been great for a smartass like David Lee Roth and a smartass like Ted Nugent to discuss the art of smartass? I would have loved to have had that conversation, but there was no chance for it — the guy was out of his mind."

In a 1987 interview with Guitar World, Nugent said Eddie Van Halen was "a contemporary leader of the pack with as much impact as any individual guitar player who ever lived — an innovator when innovation seemed to be attacked, an inspiration to every guitar player who wants to take the lyrical interpretation of the instrument beyond its confines."

Last month, Ted released the official lyric video for his new song "Come And Take It". The track will appear on Nugent's recently completed new studio album called "Detroit Muscle", which is due on April 29, 2022 via Pavement Music. The follow-up to 2018's "The Music Made Me Do It" was produced by Michael Lutz and Nugent and was recorded with Ted's current band, which includes bassist Greg Smith and drummer Jason Hartless.