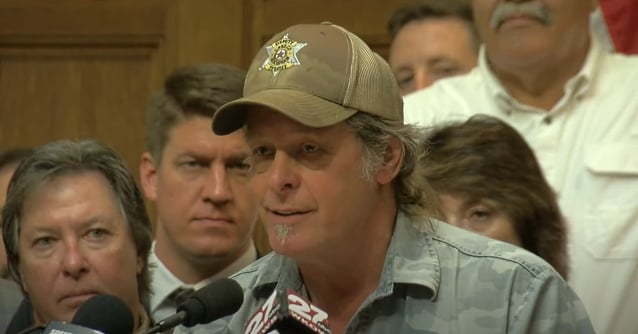 According to the Milwaukee Journal Sentinel, outpoken conservative rocker and avid hunter Ted Nugent joined Wisconsin Republicans on Wednesday to promote the recent unveiling of their package of 13 bills that would declare open hunting season on sandhill cranes and allow anyone age 18 or older to carry concealed firearms without a permit.

Nugent, who is also the national spokesman for pro-hunting lobbying group Hunter Nation, and lives in neighboring Michigan, stopped by the state Capitol in Madison where he appeared with more than 20 Republican lawmakers. He said Wisconsin should be managing wildlife differently and removing restrictions placed on hunting, fishing and trapping.

"My dad took his kids hunting, so he didn't have to hunt for his kids," he said. "And now I take my kids and my grandkids hunting, because the stimuli factor, the excitement factor, the challenge of being the very best that you can be, tuning in to your stewardship responsibilities, your conservation, hands-on participation in the natural, renewable season of harvest, so that when you celebrate Thanksgiving, you know where that turkey came from, you know where that venison came from, you know where that trout came from. And I'm here, not representing any Ted Nugent opinions — I'm not that cocky. I'm adequately cocky, but not cocky enough to think that I might have an opinion on God's renewable creation. I'm speaking for those millions and millions of American families who pursue this lifestyle of hands-on conservation that literally is God's work. When they're overregulated, people quit. People don't participate. We're going to cleanse the arbitrary, punitive, capricious, overregulation."

Nugent also addressed the constitutional carry portion of the package of bills and said he was born with the right to carry a gun.

"I have a right to keep and bear arms on the ground in the United States of America; it's a God-given right," he said. "This Second Amendment consideration is on par with science-based hunting regulations to allow us to perform our conservation responsibilities, as well as our self-defense responsibilities."

The package of bills, dubbed the Wisconsin Sporting Freedom Package, was released earlier in the month. The bills range in topics from adding more pheasants and brook trout, to simplifying turkey hunting seasons, to reducing Department of Natural Resources regulations.