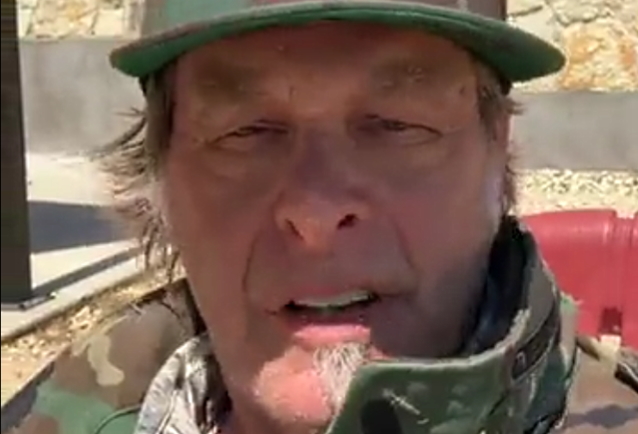 Ted Nugent has denied ever saying COVID-19 was a hoax — months after he said the virus was "not a real pandemic."

The outspoken conservative rocker, a staunch supporter of former U.S. president Donald Trump, fired back at media reports one day after announcing he had contracted the novel coronavirus.

Nugent, who tested positive for COVID-19 on Monday, took to Facebook Live earlier today (Tuesday, April 20) to call out the mainstream media for allegedly distorting his previous comments about the virus.

"The lies I've seen that I've been doing these public appearances knowing I had the COVID-19. False," Ted said (as transcribed by BLABBERMOUTH.NET). "Saying that I claimed COVID-19 was a hoax. False. I've always said… We have actually footage of me saying, if not hundreds, thousands of times… Of course there's a Chinese virus. Hello? Who thinks that I claimed there's no Chinese… There's a Chinese virus. They call it COVID-19. I'm well aware of that."

"You know, comfortably numb is actually uncomfortably dumb, because when I said, 'What about COVID-1 through -18?', they missed the whole point," Ted insisted in today's Facebook Live stream. "I know there was not a COVID-1 through -18, but there were past COVIDs prior to COVID-19 that nobody ever shut down any mom-and-pop businesses, never encouraged the economic destruction of the entrepreneur engine that drives America. So I was merely commenting that prior to COVID-19, nobody ever shut down anything — not for Ebola [virus], not for the Spanish Flu, not for AIDS, not for the Black Plague. But they're doing it for COVID-19. So I was referencing those past epidemics-slash-pandemics as maybe a generalization of COVID-1 through -18."

He continued: "You stupid motherfuckers. The left is such a great source of comedy. Keep it up. Richard Pryor isn't around anymore. We can't rely on him for the ultimate comedy, so we rely on the comfortably numb nuts, uncomfortably dumb nuts."

When Nugent revealed his COVID-19 diagnosis, he said that he has never felt so sick in his entire life. He also said many people warned him against announcing his diagnosis.

"I have had flu symptoms for the last 10 days and I thought I was dying. Just a clusterfuck," he said.

"Today is the 19th of April 2021 during clusterfuck pandemic... I was tested positive today. I got the Chinese shit. My god, what a pain in the ass," he added, describing his symptoms.

Despite saying he "literally could hardly crawl out of bed the last few days", Ted said he still won't take the vaccine because "nobody knows what's in it".

In the past, Nugent had repeated a narrative pushed by conservative media and disputed by health experts that suggests the official death count from the coronavirus is inflated.

In December, Nugent expressed skepticism that coronavirus was as dangerous as health officials said it was, calling it a "scamming pandemic" and vowing not to take any vaccine.

"It's not a real pandemic and that's not a real vaccine. I'm sorry, I ain't taking no vaccine," Nugent said in another Facebook Live stream.

Nugent has also mocked people who wear face masks, despite that both the CDC and World Health Organization have urged their universal use.