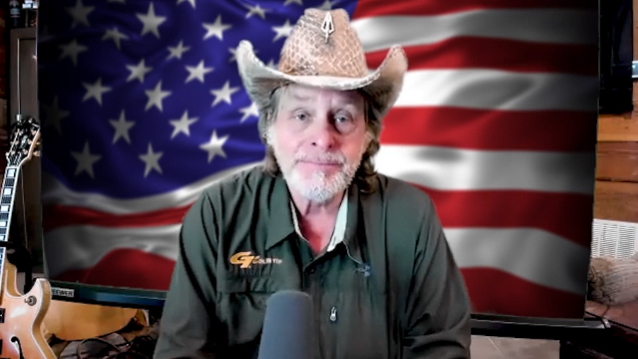 TED NUGENT Says Musicians Aren't As Dedicated As They Used To Be, Claims Older Artists 'Practiced More' And 'Loved It More'

In a new interview with Anne Erickson of Audio Ink Radio, Ted Nugent said that when it comes to musicians, they don't make them like they used to. "Musicians aren't as dedicated today," he said. 'I know there's a bunch of great ones. I mean, Joe Bonamassa is a young guy, and Kid Rock is not a young guy, but he's now. And I love what BIG & RICH do. I love the sincerity of Blake Shelton and Toby Keith, though I can't stand most country music. And GRETA VAN FLEET does a great job, and everything the FOO FIGHTERS do is awesome. But, it's not like Ted Nugent or Bob Seger or the AMBOY DUKES or ZZ TOP or CHEAP TRICK or MONTROSE or VAN HALEN. You know what I mean? Those bands, we just practiced more; we loved it more.

"So, that's why 'Detroit Muscle' is gonna be really significant to people who love that fire and that defiance and fun," he continued, referencing his upcoming album. "Music is supposed to be fun. Even when you articulate corruption and 'Dog Eat Dog' sabotage on the downtown streets and police cars overturned — yeah, I'm identifying social conditions, but I also am a master at escaping social outrageousness and replacing it with fun, defiant, 'We The People,' middle-finger-on-fire, grinding Motown funk brother outrageousness."

This past November, Nugent released the official lyric video for his new song "Come And Take It". The track will appear on "Detroit Muscle", which is due on April 29 via Pavement Music. The follow-up to 2018's "The Music Made Me Do It" was recorded with Ted's current band, which includes bassist Greg Smith and drummer Jason Hartless.

Nugent, who is the national spokesman for pro-hunting lobbying group Hunter Nation, told Florida's 99 Rock WKSM radio station that "Come And Take It" is "a love song to the punks in our government who think that they have the right to infringe on our constitutionally guaranteed, God-given individual freedoms… I think it really represents the heartbeat, the pulse, the heartbreak, really, of thoughtful, critical-thinking Americans. Which, by the way, if you're not a critical thinker, you should probably move to Cuba where you're not allowed to be. Critical-thinking Americans that are rock solid in the asset column love this song — they love me, they love freedom, they love defiance, they love my middle finger on fire."