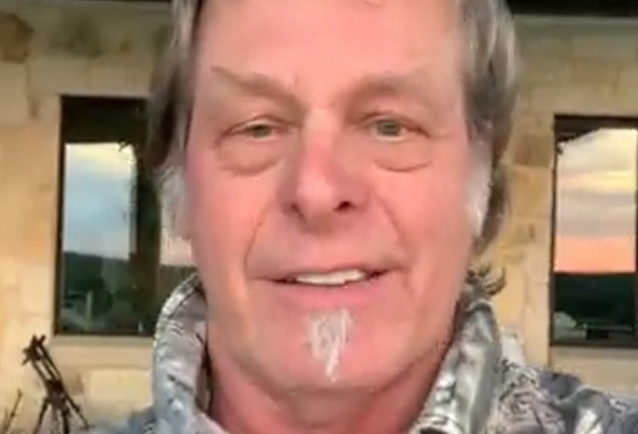 TED NUGENT Tests Positive For COVID-19: 'I Thought I Was Dying'

Ted Nugent says that he has tested positive for COVID-19.

The outspoken conservative rocker broke the news of his diagnosis in a Facebook Live stream earlier today (Monday, April 19).

"I've got an announcement to make," Nugent said. "Everybody told me that I should not announce this.

"I have had flu symptoms for the last ten days. I thought I was dying. Just a clusterfuck.

"I was tested positive today. I got the Chinese shit. I've got a stuffed up head, body aches. My God, what a pain in the ass. I literally could hardly crawl out of bed the last few days… So I was officially tested positive for COVID-19 today."

Nugent went on to say that he is "homebound, i.e. quarantined" while he is recovering from the disease.

Later on Monday, Nugent spoke in a little bit more detail about his COVID-19 battle during an episode of his Internet show "Spirit Campfire". He said: "I've been around a long time — 72.4 years, to be exact — and it's been quite an adventure… But I have never been so sick in all my life… I could barely crawl out of bed. And I'm not looking for sympathy; I'm just trying to share a medical emergency during a global medical emergency, and what the Nugent tribe, what this guitar player is doing to counterpunch a COVID-19 positive test this afternoon. And it's gonna be willpower."

Earlier this month, Ted made headlines when he suggested the novel coronavirus is referred to as COVID-19 because there have been 18 other coronaviruses. Nugent also once again repeated a narrative pushed by conservative media and disputed by health experts that suggests the official death count from the coronavirus is inflated.

In December, Nugent said that he would refuse to be vaccinated against the new coronavirus and he railed against pharmaceutical companies and their development of the vaccine. "A vaccine that was authorized in four months compared to every other vaccine that took years of adequate testing. Have you seen what's in it?" he said earlier this month.

Ted has called Donald Trump "the greatest president in our lifetime," and has said that the billionaire real estate mogul represents "the heart and soul of the best American families out there."