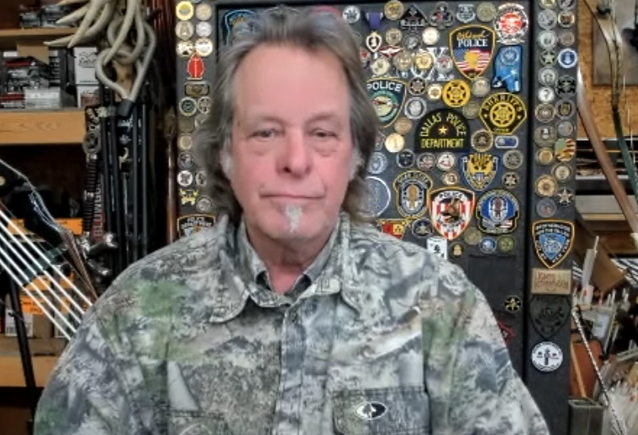 TED NUGENT: 'The Dumbing Down Of America Has Been On The Fast Track Since The 1950s'

Ted Nugent says that "apathy", "ignorance" and a "dramatically flawed" election process are all at least partially to blame for the fact that the "red wave" that some predicted would come during the midterm elections didn't happen.

Had the red wave materialized, it would have given Republicans control of Congress and critical positions in swing states. Republicans may still win the majority after all the votes are counted, but by a smaller margin than Democrats feared.

Nugent, an avid supporter of former U.S. president Donald Trump, whose candidates across the country failed to gain office last night, weighed in on the election results during the latest edition of "The Nightly Nuge", a news-style clip in which he offers his take on the news of our world every night. Asked by co-host Keith Mark why he thinks the results turned out not to be what many Republicans were expecting, or hoping for, Ted said in part (as transcribed by BLABBERMOUTH.NET): "The people that voted Democrat, they voted for the importation of fentanyl to kill their fellow Americans. 'Well, I didn't vote [for that].' Yes, you did. That's what they did. They voted for us to be subservient to China. 'Well, I didn't vote [for that].' Yes, you did. And you need to engage your friends and say, 'You know, if you're not registered to vote, China, the communist Chinese, would like to thank you. It is that glaring.

"The dumbing down of America has been on the fast track since the 1950s," he added. "I mean, literally what's not taught in school and what is indoctrinated in school is an intentional dumbing down, so people are less knowledgeable, less smart and less suspicious of authority. Also, it's at all-time high that people don't care. So you have apathy and ignorance. And then add to that that the election process is dramatically flawed — dangerously flawed — and until we fix that, we'll never know what the real heartbeat of America is."

Nugent has been very publicly critical of Joe Biden, comparing him to Adolf Hitler following a speech the U.S. president made in September. Last year Nugent declared Biden a "rotten" human being and railed against Democrats who support the president's "ugly policies." He said during an appearance on "The Wild Initiative" podcast: "You say that some of the liberals have good intentions. I haven't met one. And I meet an awful lot of people. Because if you are on the side of Joe Biden, you're just plain a rotten human being. You support a man with a liberal agenda that renegotiated all the contracts with the globe that Trump finally negotiated on behalf of our country. That's not my hunch; that's not a guess; that's not an opinion. Trump renegotiated global contracts for the first time in my lifetime to actually benefit America, and Joe Biden reversed them to hurt America. So if you're a liberal and a Democrat, you're the enemy of freedom. And if you don't believe in those ugly, ugly policies, then you have to quit."