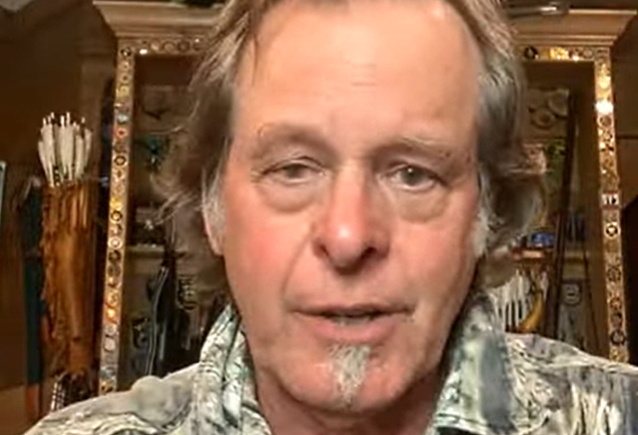 TED NUGENT: 'We're Slipping Dangerously Over The Edge Of Marxism'

Several major retailers dropped MyPillow products after Lindell continued to push bogus claims of election fraud since Trump's loss to President Joe Biden in the presidential race. Lindell also made a number of unsubstantiated claims about Dominion — the company behind voting machines used in some states — tampering with the election results.

Nugent brought up Lindell in a May 10 Facebook Live stream during which he railed against the government and the media, accusing the former of engaging in criminal activity and saying the latter practiced Satanism.

"America, it's the last hope, and we're slipping dangerously over the edge of Marxism, thanks to the glaring criminality in our government," Ted said (as transcribed by BLABBERMOUTH.NET). "The viciousness, the cruelty, the hate, the lies, the Satanic horror that is the media, celebrating that children should be able to play on the street and stab each other. That's what the Democrats believe. They said it — they said it on CNN and MSNBC; they said it: 'You shouldn't interfere when children are stabbing each other. It's just what they do.' Satan. They've gotta be the Satan gang. Only Satan would say, 'Yeah, children stabbing each other is like playing hockey.'

"So if you believe in that stuff, it's not yours, it's not mine — it's it," he continued. "It's truth, logic, common sense. And I know I regurgitate that non-stop for at least 50 years, and I know that's why we connect, 'cause I know a lot of you can't say it or you'll get fired. Look at what they're doing to Mike Lindell. The H-E-B supermarkets, the Target stores, Walmart, Kroger, Starbucks, Bed, Bath & Beyond literally threw out that great entrepreneur Mike Lindell of MyPillow, who's in the asset column, creating thousands of jobs [and] quality products. And Delta and Coca-Cola and H-E-B and Kroger and Disney and Target — Target supports the people who burnt down their stores but not a great entrepreneur like Mike Lindell who asked legitimate questions about the 2020 election. Asking legitimate questions about whether the mask works, even though that lying piece of shit Fauci said you don't need 'em on Monday, but on Wednesday you need 'em, but you don't need 'em on Thursday, but for the weekend you've gotta wear two of 'em. What a prick. What a lying, genocidal, criminal, Satanic prick. Who would listen to Fauci?"

In February, Dominion Voting Systems filed a $1.3 billion lawsuit against Lindell accusing him of selling lies involving the company's voting machines "because the lie sells pillows." In April, Lindell countersued Dominion for $1.6 billion accusing the company of "suppression of speech" and "attacks" against his company.

In the past, Nugent, a staunch Trump supporter, had referred to the novel coronavirus as a "leftist scam to destroy" America's 45th president. He had also repeated a narrative pushed by conservative media and disputed by health experts that suggests the official death count from the coronavirus is inflated.