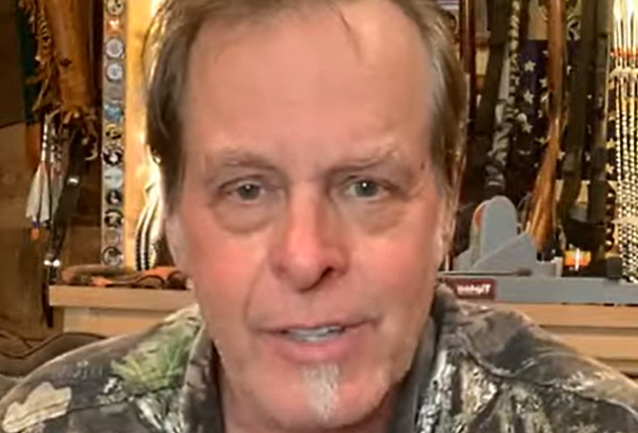 Fans expecting to see Ted Nugent live in concert this year shouldn't hold their breath. Despite the fact that live performances are finally coming back — and not just the outdoor music festivals this summer and fall, but shows at indoor venues — the outspoken conservative rocker announced in a YouTube live stream on Tuesday (May 18) that he has no plans to hit the road in 2021.

He continued: "It's heartbreaking; it's horrible. But my truck drivers, my bus drivers and all my employees, they're not gonna take a half a paycheck. If there's a half attendance or half the gigs are shut down, how do you pay for the hotels and the food, the lodging, the per diems, the highway, the gas, the fuel, the diesel, the flights, the salaries…? How do you do it? I'll tell you how: you can't. So I'm not gonna apologize, 'cause somebody should apologize to me. I wanna go tour so bad, I can hardly stand it. So don't be anticipating a Ted Nugent rock-out this year."

Although there won't be any large-scale touring from Nugent in 2021, fans in Texas can still see him periodically perform at the Tucker Hall in Waco. His next live appearance there is scheduled for Saturday, May 22. Ted will be accompanied by Jon Kutz on drums and Johnny Big on bass.

This past March, Nugent said during a Facebook Live stream that he would record the follow-up to 2018's "The Music Made Me Do It" album in May and June.

In April, Nugent revealed that he had contracted the novel coronavirus, saying that he had "never been so scared" in his entire life. The 72-year-old pro-gun activist, who had claimed the virus was "not a real pandemic," also reiterated his stance that he wouldn't be getting the vaccine and he mocked people who wear face masks, despite that both the CDC and World Health Organization had previously urged their universal use.

In the past, Nugent, a staunch Donald Trump supporter, had referred to the novel coronavirus as a "leftist scam to destroy" America's 45th president. He had also repeated a narrative pushed by conservative media and disputed by health experts that suggests the official death count from the coronavirus is inflated.