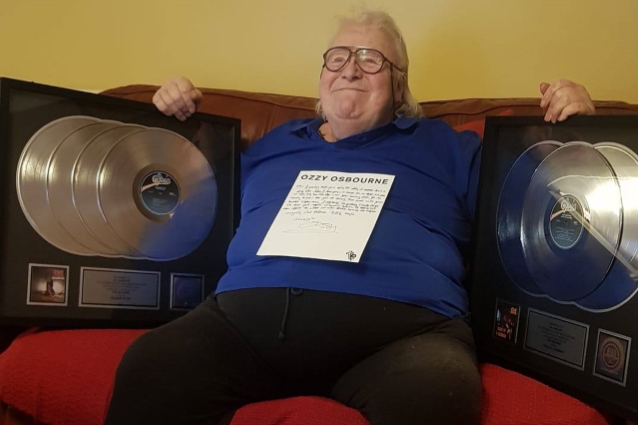 Former OZZY OSBOURNE drummer Lee Kerslake, who has reportedly been given less than eight months to live after battling cancer for several years, has received two platinum discs for his work with the BLACK SABBATH frontman.

During an interview with The Metal Voice in December, the drummer revealed that after all these years, he just wanted platinum album certifications for both "Blizzard Of Ozz" and "Diary Of A Madman", so he can feel some acknowledgement for his work before he dies.

Kerslake has now apparently been granted his wish as Ozzy shared a photo earlier today of Lee sitting on a sofa and holding the "Blizzard" and "Madman" platinum discs, a handwritten letter from Ozzy placed on his chest.

Kerslake and bassist Bob Daisley have been embroiled in a legal battle with the Osbournes for many years, which has taken a massive financial toll on the drummer.

Kerslake told The Metal Voice that his prostate cancer has spread to the rest of his body. "I have now have bone cancer, which is a nasty one, so the doctor gave me about eight months to live," he said. "But I've been fighting all the way. Five years ago, they gave me four years to live, and so that gives you an idea."

Kerslake has been working on an autobiographical documentary as well as a new album called "Eleventeen", which he hopes will come out this year.

I’m so glad that Lee Kerslake is enjoying his Blizzard and Diary platinum albums. I hope you feel better.
Love, Ozzy