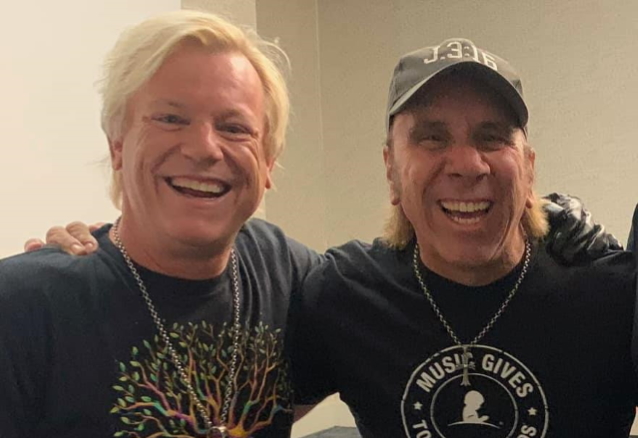 TESLA drummer Troy Luccketta has announced that he will "take a little time from the road" to spend with family and friends. He will be temporarily replaced at the band's upcoming gigs by Steve Brown, the younger brother of former DOKKEN drummer Mick Brown.

Luccketta shared the news of his absence in a post on his social media earlier today (Wednesday, September 15). He wrote: "Dear TESLA Fan's! After 35 plus years of touring with TESLA I have decided to take a little time from the road to spend with family and friends. I am happy and well, and couldn't be more grateful to my bandmates for this opportunity. I am also looking forward to some musical ventures closer to home so I will keep you all updated

"In my absence please show some love to Steve Brown. Steve is a dear friend, and great drummer! He has played with OLEANDER, Ronnie Montrose just to name a few. He is one of Sacramento's finest, The perfect choice so to speak!

"I am filled with nothing but Love and gratitude. I look forward to reconnecting with you all again in the near future.

"Much love and respect Troy."

Last month, TESLA postponed several shows due to members of the touring party — including guitarist Frank Hannon — contracting COVID-19. Hannon later issued a statement saying that he had "not been able to move all week" and revealed that he woke up with a 102-degree fever and could "hardly breathe" on the day that TESLA was scheduled to leave for tour.

TESLA played the first two shows of its summer 2021 tour — August 5 in Grants Pass, Oregon and August 6 in Grand Ronde, Oregon — without Frank. Filling in for him was Howie Simon (JEFF SCOTT SOTO, GRAHAM BONNET, STRYPER), who previously stood in for Hannon in September 2018.

TESLA will return to the the road on September 16 in Roanoke, Virginia.

After 35 plus years of touring with Tesla I have decided to take a little time from the road to spend...