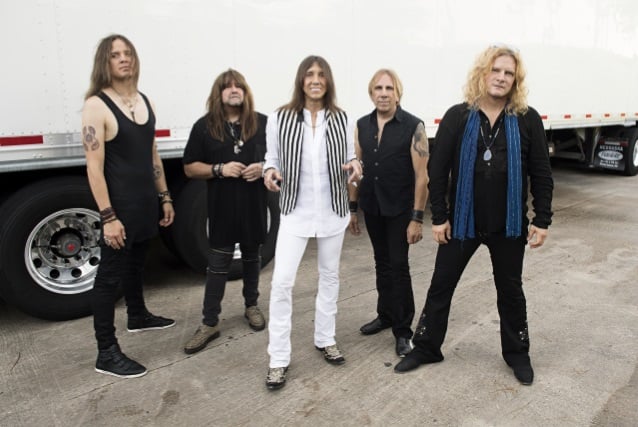 TESLA guitarist Dave Rude recently spoke with Clint Switzer of the "Music Mania" podcast. The full conversation can be streamed below (interview starts at the 4:50 mark). A few excerpts follow (as transcribed by BLABBERMOUTH.NET).

On TESLA's recently completed tour with STYX and JOAN JETT AND THE BLACKHEARTS:

Dave: "It was such a great tour. It was three bands that are all, like, rock, and all different enough where we've got different fan bases, but similar enough where all those fan bases liked the other two bands on the bill, so really, it was cool. On top of that, all the bands were super-cool. We were buddies with everybody. All the bands were hanging together every day, and same with the crew. Everybody got along. It was kind of a magic tour. They're not all like that, and it was really nice to have such a great vibe all around."

On TESLA becoming a staple of "summer shed" tour packages:

Dave: "We're so lucky to be able to be on these bigger tours these last couple of years. We were out with DEF LEPPARD for almost three years. We did three summers and I think a spring tour. It was a long time, and that was another one that was really great with those dudes. It's a big thrill to be able to go up on stage and there's ten or fifteen thousand people there. The really cool thing that we're super-grateful for is us going on first at, like, 7 o'clock every night, usually people don't really show up for that. You're kind of playing to the die-hards and a couple of early birds who show up to get in a quick beer line before the headliner goes on, but every show, the bulk of the crowd was there before we started. People came early for TESLA at every gig, and it was just so cool, because it gets us excited, and the fans get a bigger show. When everybody's in the house, it's an exciting vibe [and] it's a more fun concert experience."

On their upcoming fall headline tour:

Dave: "We're really excited. Neither one is better; it's just two different sides of the coin, and the big upside for us is that everyone's there for us. It's just a different vibe. We can do whatever we want, and we have the longer set, so you're going to get more of the classic stuff, you're going to get more deep tracks, everything, newer stuff, the whole deal. On our headlining shows, we do a little acoustic set in the middle of the show. We break it down, pull out a little drum kit, put stools up and do sort of a mini-'Five Man Acoustical Jam' that we don't have the time in the bigger shows for. That alone is a pretty big change. TESLA's known [for] the acoustic side pretty well, so it's a really fun thing to do and people definitely get into it. That's one of the cool things about doing our own stuff. It's nice to be able to do both — to go out on a bigger tour and then come back and do our own."

On his dozen years in TESLA:

Dave: "It's been so good. I've been really so lucky. We've always been cool and gotten along since day one, which was part of why the vibe was just good all around from the beginning, but the fact that it's only improved and deepened, it's even cooler now. We get along really super-well; we love playing together; we love writing and recording, and had a really good time making this new record that's coming out early next year. When you make a new record — especially when it's a fun process, the writing and recording — it kind of solidifies everything even more, and you kind of feel more unified and all that. It's just been great, and I've always been lucky that the guys in the band were always so cool, and also the fans. You never know if being the new guy in a band if you're going to get accepted, but since day one, they were always super-cool and very accepting."

Dave: "It was really cool and pretty organic. All the guys in LEPPARD are really nice and personable, and they're one of the few bigger, huge, icon, headlining acts — at least that we've been out with — that hangs out. They're there all day. You'll see them in catering; they soundcheck every day. Some of the bigger bands kind of don't hang out – they just show up right before they go on stage, and then they leave. These guys are there for the duration and [are] totally approachable. We were all hanging with Phil and being his buddies and kind of got talking about music. He started giving us some advice — like, 'Hey, why don't you do a live record for 'Mechanical Resonance'?' Then we started doing that, and he's like, 'Hey, if you're going to do that, for a bonus track, I got this song that I wrote. Why don't you try and do it and I can produce it?' In the process of working on that song, it went so well, we were kind of, like, 'Why don't we do a whole, real record where we write the songs and Phil produces it?' It was such a nice experience working with him on that one track, so that's what we did. We did a lot of the writing and a lot of the recording on tour with DEF LEPPARD because we were together for so long, that we could use all those downtime hours in the afternoon. For us, the opening band on those big tours, we don't get a soundcheck, so we don't really have anything to do until the late afternoon, so we were just working on the record. Phil would be able to be there for most of that, and it was really, really cool. He helped co-write all the songs; he had a lot to do with the sound of it as well. It's a very produced record, with tons of guitars and tons of vocals that still sounds like TESLA, but definitely a little bit different phase."

Dave: "We've got no plans to slow down. We want to ramp it up. As [other] bands go down, we want to be the ones that you can come still see. It's weird, because as a fan, you're like, 'Oh, man, everyone's gone,' whether it's passing away or retiring or breaking up or whatever it is. It makes you appreciate it that much more that we're still able to it, and that the bands we're out there with are still able to do it, and they do it well, where people are really excited about it. There's nothing worse than going to see your favorite band and they suck, so we put a lot of effort to make sure it's a good gig. Being able to keep that classic rock and that style of music alive, it's a gift to be able to do it, and it's a gift that people still want to hear it."

"Shock", TESLA's ninth full-length album, is tentatively due in early 2019.