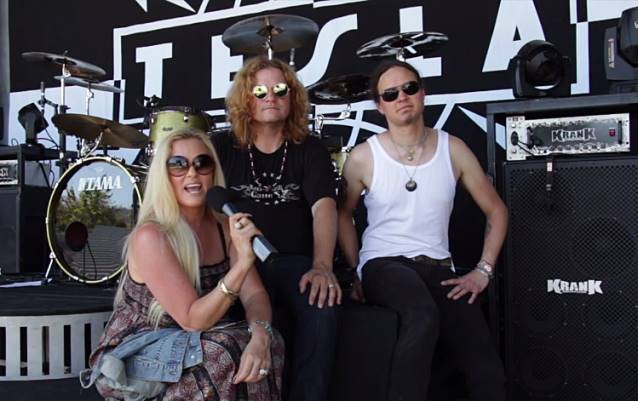 TESLA Interviewed On 'In The Vault With Shanda Golden' (Video)

"In The Vault With Shanda Golden" (web site) recently conducted an interview with Frank Hannon and Dave Rude of TESLA. You can now watch the chat below.

TESLA's new studio album, "Simplicity", sold around 14,000 copies in the United States in its first week of release to land at position No. 24 on The Billboard 200 chart. The record arrived in stores on June 10 via Tesla Electric Company Recording's arrangement with Entertainment One Music and distribution.

The Sacramento rockers are back with 14 new songs offering a ride of energy that doesn't come easy for a band of rookies much less a band whose been doing this for over 20 years. "Simplicity" is TESLA's seventh all-original studio album which follows a six-year creative break from the release of the previous album, "Forever More".

After a string of shows in the USA in 2013, the band went back into the studio in early 2014 and came out with a new album, which goes straight back to the TESLA roots. The bandmembers produced it themselves, as they did with "Into The Now", their successful comeback effort from 2004. Helped by the legendary Tom Zutaut, who was the man behind the best TESLA albums, this new CD rocks from start to finish, showing a variety of emotions where each song has its own twist — not sounding like another.

In a recent interview with NI Rocks, TESLA singer Jeff Keith stated about the band's approach while writing and recording the new album: "We wanted to keep it simple. With so much of today's technology, Pro Tools and all that stuff, it's very easy to overdo it and oversaturate the record, because there is an endless amount of tracks you can do and there are so many ways you can cheat and stuff. We like to make records that we can keep simple and reproduce live you know." He continued: "'Simplicity', we thought, was a great name for the record because we wanted to keep it simple and we're a simple blue-collar rock 'n' roll band. We always like to make records, like I said, that we can play live."