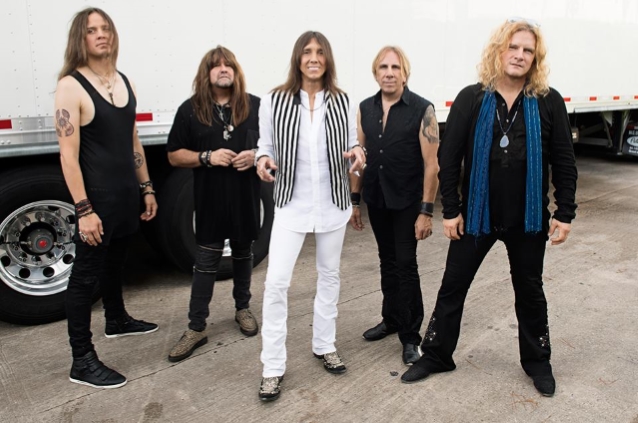 The "Shock" title track can be streamed below.

TESLA guitarist Frank Hannon told The Metal Voice about "Shock": "It definitely has an '80s kind of polished production... but there is no real direction. I always quote '[This Is] Spinal Tap', when Nigel [Tufnel] says, 'Changing our style is our style.' We don't really pigeonhole ourselves into one sound. We've got elements of metal, country, Americana, a lot of these different directions... This new album, it has the big production, but every song sounds different. Each guy in the band has a different influence. I'm influenced by southern rock a lot, so you're going to hear some slide guitar riffs on there, but there's also, like, [bassist] Brian Wheat, who's influenced by QUEEN and THE BEATLES, so you're going to hear these big Beatle vocals. Phil Collen obviously, you're going to hear some DEF LEPPARD-style influence... It's a combo pizza, man. It's got everything on it."

Regarding Collen's involvement in "Shock", Frank said: "Phil came to us and wanted to produce an album for us... Phil really, really helped us. I'll be honest — we were at a low point after we did [2014's] 'Simplicity'. We were really frustrated, and we were probably not going to make another album. Phil had a bunch of song ideas, and a lot of the writing on the new album is co-written with Phil. He interjected a lot of positive energy for us and helped us get back on our feet. He's bringing production quality and details that we would have not done and haven't done in the past. Some fans may not like it; some fans are probably going love it. This is something that we wanted to try, we've never worked like this before. Mutt Lange is a producer that really has techniques that are very detailed in the studio, and Phil obviously has experienced all that, and he brought that type of approach into making a TESLA record, which we'd never done before. There's a lot of killer sonics. The sound of this new record is really... I don't know how to describe it. It's just awesome; it's produced; and, like, really powerful."