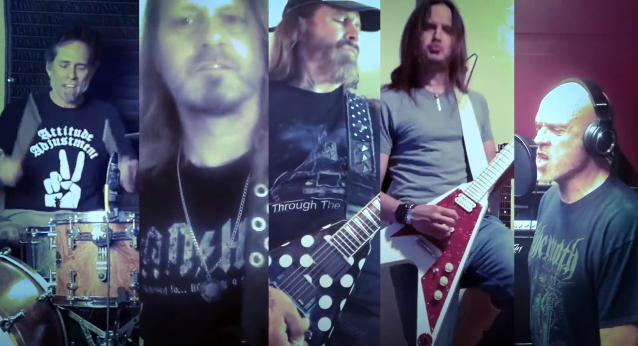 Phil uploaded the video to his YouTube channel, writing in an accompanying message: "This was Mark's baby and asked me to host this as part on this series."

Added Mark: "Bay Area Bro jam!! That's what we did. What an amazing cast of musicians I had the pleasure of doing this with. From the opening riff until the pick slide at the end, it's nothing but a good time vibe that the local boys laid down.

"I reached out to Phil and Sean a few weeks into SIP and asked if they would want to do a jam video of a TORQUE/VIO-LENCE song with other musicians. Phil suggested we do something else. After watching Charlie, Alex, and Ra doing RUSH, I didn't want to try something that was going to try to copy that level of technicality! To keep with the original groove and make it fun was what I had in mind. To make it heavy was something that would be unavoidable.

"Sean picked 'Snortin’ Whiskey' and it couldn't have been a better choice. The right amount of groove, guitars, and levity. Plus, who doesn’t love a good cowbell section, huh?!

"After throwing a bunch of names around with Phil, he suggested we keep it in The Bay. First guy I thought of was Dan McNay whom I had jammed with at one of Phil's MERKINS gigs at Christmas. Dude lays down a solid groove that was a great foundation for Phil's next suggestion. Dave Rude we have known and loved for over 2 decades. Always knew this guy was a star, and his swinging rhythm guitar and leads are proof of this. Phil, well, he just owns the guitar. Ever since I had the pleasure to play with him when I was 19 yrs old, he has ALWAYS been one of the most versatile and technical players alive. Seriously, the guy is a fucking juke box machine when it comes to knowing songs! Sean absolutely CRUSHED this song. To say he is unique is an understatement. There is only ONE Sean Killian. Period. The conviction he has when he delivers lyrics is something I have always been in awe of since the first time I heard Eternal Nightmare.

"I feel lucky and grateful to have been a part of this and what we did makes me proud of the Bay Area and the talent it has given the music world. Keeping it positive and keeping it fun."