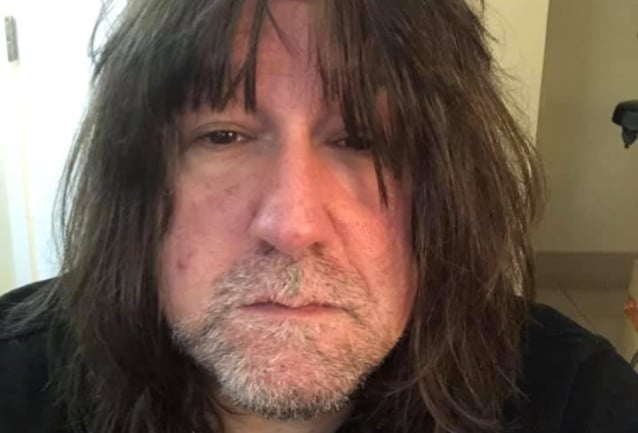 TESLA's BRIAN WHEAT On Former Guitarist TOMMY SKEOCH: 'He Has A Lot Of Animosity Towards Me, For Whatever Reason'

TESLA bassist Brian Wheat, who is promoting his recently released autobiography, "Son Of A Milkman: My Crazy Life With Tesla", spoke to Sofa King Cool about his relationship with the band's former guitarist Tommy Skeoch.

"He has a lot of animosity towards me, for whatever reason," Brian said. "Maybe because I'm the one that just says, 'Hey, man, this is fucked up.' But he knew what was going on [before we fired him]. And the band had several discussions and meetings with him, and he was meant to be keeping it together. And he didn't. The band voted unanimously [to kick him out of TESLA]. It wasn't like it was three to one; all four of us agreed it was time for him to go.

"Look, I don't think really in his heart of hearts Tommy liked anybody in the band except for [singer] Jeff Keith — you know, actually liked him," Brian continued. "He wasn't a really friendly guy. He wouldn't call you up and go, 'Hey, man, you wanna go to dinner tonight,' or, 'You wanna go hang out and see a movie.' He played in the band with us, but he wasn't really a friend. I think he was a friend to Jeff Keith. I thought he was my friend, which is why it kind of bums me out.

"From the time we got back together in 2000 until he left in 2006, he stayed with me and [my wife] Monique every time he came to Sacramento to work with the band; he would stay at my house. And I thought me and him were pretty good buddies. But, obviously, when things got bad again, he kind of reverted back to blaming me.

"I have no ill feelings towards the guy, man. There were times I really enjoyed his company, to be honest with you. He said a lot of hurtful things about me, which pissed me off. I'm the kind of guy if you fucking piss in my bowl of cereal twice, three times, that's it — I'm done with you.

"Look, I wish him no ill will. I hear he's got a new band out, and I heard a song that sounded really good. I was really happy to hear him doing that kind of music, which he's really capable of and he's very good at, instead of some of this weird punk rock shit he was doing on his own. 'Cause, obviously, I know what he's doing. We all follow each other. We're always interested in what each other is doing. We just fell out."

Addressing the possibility of one day reconciling with Skeoch, Brian said: "It's funny, 'cause the other day [SiriusXM DJ] Eddie Trunk asked me, 'Do you ever think that you'll be friends with me again, or would you ever like to make up with him or sit down and clear the air?' And just off the cuff, me being the way I am, I said no. But in actuality, probably, yeah, I wouldn't mind sitting down with him again and going… And that don't mean he's gonna come back to the band, or we're gonna be friends or whatever. Just karmically, I think we do have this common thing that we did, and there were times that we had some fun together. Just for myself and healing, spiritually, I would like maybe one day to say, 'Look, Tommy, I didn't do this to you. You did this. Don't blame me. Use your talent. You're a talented guy.' 'Cause I also say in the book that when he wasn't fucked up — he didn't start getting fucked up till after 'Psychotic Supper'. He was fine. I mean, he was like a workman. He wanted to work and do the best he could all the time.

"I felt kind of bad after I said that on Eddie Trunk," he continued. "'Cause maybe [Tommy] does — maybe he'd like to bury the hatchet and shake hands. And if we're ever lucky enough to get in the Rock And Roll Hall Of Fame or whatever, I want him up there with us — him and Dave [Rude, TESLA's current guitarist] both — and sharing in that celebration, because that body of work everyone should be proud of.

"I change from day to day," Wheat admitted. "So there is still a little bit of me that has some brotherhood with him, whatever it is, even though he's the brother I'd probably like to punch most at certain points in time in my life. When I do look back and I just think about the good times with him, I have a sentimental spot for him."

Asked if it bothers him when Skeoch still sometimes speaks negatively about TESLA in interviews, Brian said: "That's what bothers me. I was reading one of his interviews the other day, and he said, 'I was the edge of that band,' like he was the only one [in TESLA] that knew how to rock, which is bullshit. I mean, he did rock, but fucking 'Edison's Medicine' was pretty rock and roll. He didn't write that fucking song — I did, me and Frank [Hannon, guitar]. 'And they're okay now if you like kind of lounge soft, pop-rock.' And I thought he's just being a cunt. It's, like, you don't need to say that, Tommy. That's not true, and we're not a lounge act. That pissed me off.

"So just about the time I start to feel a little softness for the guy, he'll say something like that, and then I'll say something about him. So that's kind of the relationship we have. But having said all that, there were times me and him had a good time together."