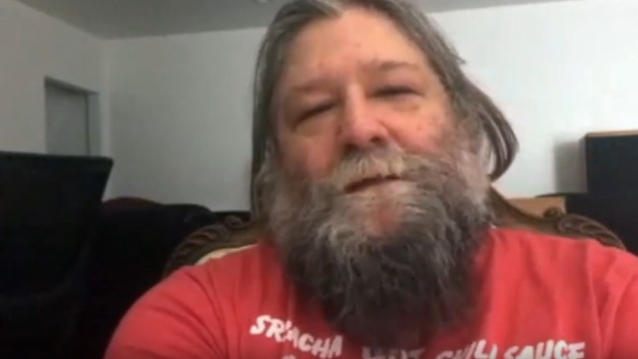 TESLA bassist Brian Wheat has taken issue with the label "hair metal," saying that the pejorative term was coined as a way to disparage acts thought to have been all flash and no substance. Speaking to "The Cassius Morris Show", Wheat said (as transcribed by BLABBERMOUTH.NET): "I find [the term 'hair metal'] condescending. What does fucking hair have to do with the music? Should we be called 'cock metal' because we all have big dicks? Seriously, it's, like, 'hair metal' — what does that have to do with [anything music-related]? It's condescending. It's a putdown. It's almost like saying, 'Well, the music's not valid. They just had good hair.' That's what it's like.

"You can take the greatest hair metal band, whoever it is. I don't even know — who's hair metal? Would MÖTLEY CRÜE be considered hair metal? I guess they would. Well, 'Home Sweet Home' was a great song. What did fucking hair have to fucking do with that song? 'Dr. Feelgood' was a great song. So it's condescending. It's a putdown. Should we say about NIRVANA 'uncleanly music,' 'cause they look like they didn't bathe?

"I don't like it," he reiterated. "Just talk about the music, because that's what what matters. Not about the hair. If you wanna call it anything, call it '80s metal — call it 1980s rock. 'Cause that's what it was — it was rock that came out of the '80s and early '90s. THE BLACK CROWES came out a year later than TESLA, and they're not called a hair metal band.

"Why call us a hair metal band when all we were doing was imitating AEROSMITH?" Wheat, who is promoting his recently released autobiography, "Son Of A Milkman: My Crazy Life With Tesla", added. "I think we're very parallel to an AEROSMITH. I think, personally, if you can't go see AEROSMITH and you wanna see a good version of AEROSMITH, go see TESLA. They're very similar. I mean, Jeff Keith looks like Steven Tyler; he sings like Steven Tyler."

"Son Of A Milkman: My Crazy Life With Tesla" arrived in December via Post Hill Press.