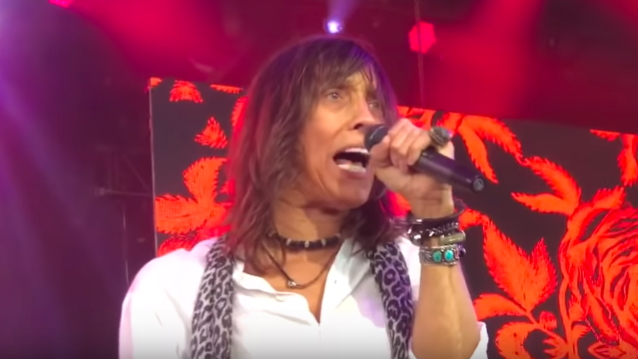 TESLA's JEFF KEITH: 'The World Will Learn To Work Together' As A Result Of Coronavirus Pandemic

TESLA singer Jeff Keith spoke to Anne Erickson of Audio Ink Radio about how the coronavirus has affected almost every business in the world and especially the music industry. He said (hear audio below): "It's impacting everything — every congregation, from birthday parties to, my Gosh, even funerals, church. Every function that people gather is out. So all livelihoods are being hit — everything. The whole world is having to deal with this, so, if anything, what good, I think, will come from it is that the world will, and has to, learn to work together — the entire world. Not just this country and that country — the entire world.

"They say that good things come from even better things, and that would be my take," he continued. "As bad as this thing is, and it's terrible, and it's horrible, but at least, if anything, we have no choice. And hopefully we will catch on to that and we'll all work together as the world with the environment — on everything.

"It's great to be from a country and to stand up for the country you're from, but to work together as an entire world is the most incredible thing."

Keith also talked about how he is personally dealing with the stresses of the pandemic. He said: "We're a week or two behind some other countries, and we're starting to get the big hit like some countries that were doing things two weeks earlier — their numbers are starting to come down, and our numbers are starting to go up. The numbers are gonna start going up — they're going up in all different kinds of places — and we've just gotta get a handle on this thing. What it takes is the hardest thing to do, is for everybody just to stay put.

"Myself, I drive out — I'm looking at Folsom Lake right now; it's five miles from my house, and I’m still in my own controlled environment inside my truck, looking out at the lake, talking to you," he added. "It's still keeping to myself. You have to be careful shopping. A lot of people are freaking out. I saw a thing on the world news yesterday where people that really need the medicine can't get it, 'cause people are getting' it just to stockpile it. The toilet paper thing — I don't get it. [People] can't even get toilet paper and Kleenex and paper towels, because everybody went and just kind of hoarded it out."