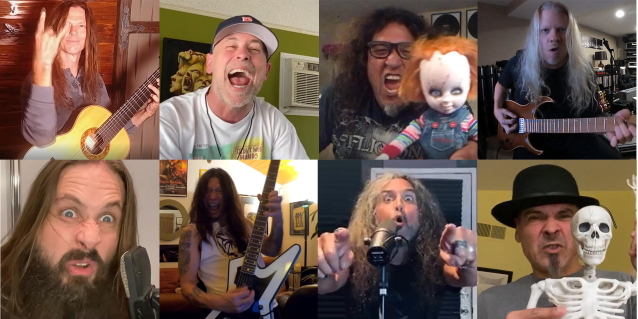 The "Metal Party" clip was spearheaded by Stephanie's longtime boyfriend, former MEGADETH and current IN FLAMES guitarist Chris Broderick, and it features appearances by the following musicians, among others:

Stephanie has been shooting photographs since the 1980s. Her first professional gig was straight out of college working for RIP magazine. She has also been published in Rolling Stone, SPIN, Yahoo!, Metal Edge, Metal Maniacs, Guitar World, Drum, USA Today, Metal Hammer and countless other publications. Her photos have also graced CDs, bumper stickers, DVDs, posters, advertisements and even t-shirts.

Stephanie says: "You're more likely to see me at a MEGADETH show than a Kelly Clarkson show, but I've actually shot both."