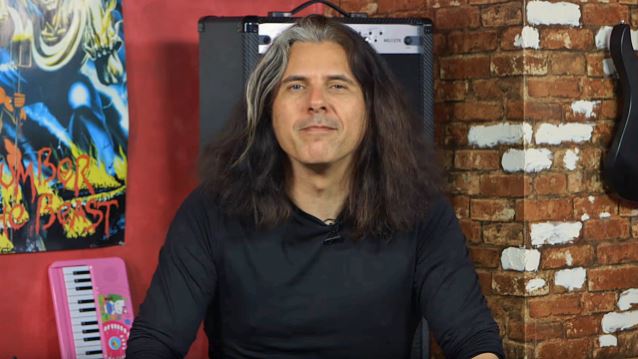 METALLICA's appearance with the pop superstar at the 59th annual event in Los Angeles Sunday night (February 12) turned into something of a disaster when the Grammy sound crew did not turn frontman James Hetfield's mic on, forcing him to share the mic with Gaga after the first verse and chorus. That seemed to take the steam out of the song, although a scantily clad Gaga gamely gyrated around the stage and even dove into the audience at one point.

The performance was not helped by the other onstage dancers feebly pretending to be metalheads, and as a further humiliation, presenter Laverne Cox did not even introduce METALLICA by name. At the end of the song, a visibly angry Hetfield hurled his guitar at a road-crew member while kicking over his mic stand.

In a post on his Facebook page, Skolnick offered his thoughts on the METALLICA-Gaga pairing, writing: "[It was a] great idea in theory. Would have/should have gone down in history as a home run for the ages. Unfortunately to be forever overshadowed by mic problems (can't fault anyone performing) and failed intro (please make sure all presenters do a quick run-through before going on. I did when introducing THE DILLINGER ESCAPE PLAN at Golden Gods. Haven't we learned from from John 'Adele Dazeem' Travolta??).

"Saw a few comments accusing Lady G of 'leaving James hanging,' and saying 'she didn't help' while others claim she 'came to his rescue' and 'saved the day.' Both are wrong: She (and the guys) are all wearing in-ear monitors which — as anyone with experience using them can tell you — provide a custom mix separate from the audience. You don't hear anything else. The first thing you assume if you don't hear a vocal or other part that's supposed to be there is that it's just an issue with the monitors relating to your individual in-ear mix, which does happen sometimes (who'd ever guess — in the heat of performing no less — that Hetfield's mic isn't even on in the house? At the Grammys?!).

"In other words, she had no idea and just did her thing. So all in all, for the naysayers, I think you have to look at the following:

A) What other mainstream pop superstar would even dare get up there with METALLICA (or any other metal band)?

B) Who else could pull off performing with Tony Bennett one moment and METALLICA the next, with equal love and appreciation for both?

C) Sure, it was maybe a bit over-the-top for those more interested in METALLICA than her. But then again, she is Gaga, after all (over the top is her middle name, or at least should be).

D) Yes, she does lot of theatrics, but she's also someone that can kill with just her voice and a piano (which I hope she'll do more of one day).

E) Given her and Lars's [Ulrich, METALLICA drummer] interest in art and doing the unexpected in music, it absolutely makes sense they'd collaborate.

F) Bottom line, did she sound good on the tune if you turn away from the imagery and just listen? Heck yes! Great song choice, too.

"The only thing I'd change (other than the mishaps, which were accidental) is this: Why was there a freakin' Zumba class going on up there? Whose idea was that? Get real fans up there rocking out for effect (as METALLICA does at some shows),but a bunch of obvious pop dancers/models in metal-like wardrobe gave it a very 'Hot Topic' vibe. Otherwise, it's all [thumbs up] from here and I truly hope they'll give it some tweaks, maybe add a tune or two and try again!"

Prior to the performance, METALLICA guitarist Kirk Hammett spoke about how the Gaga collaboration came about. He said: "You know how the Grammys always like to have their duets thing. And so when it was suggested that Lady Gaga do it, we thought, 'That's interesting.' But when she came down to actually work with us with the song last night, it turned out really, really, really well. I mean, she was really open and willing to work with different arrangements and see what worked well over the course of the song. And it was great. She was really, really great to work with last night."

Added bassist Robert Trujillo: "She's got a lot of edge and attitude, which is important for what we do. And she actually came to see us play… We did a small show at the Henry Fonda theater [in Los Angeles], and she saw the whole show, stayed for it. She really enjoyed it, she was rocking out, and then somehow, magically, this all started to happen."

METALLICA was up for a Grammy for "Best Rock Song" for the track "Hardwired" from its new album, "Hardwired... To Self-Destruct", but lost to the late David Bowie's "Blackstar".

Following the Grammy Awards, METALLICA played an intimate show for around 3,000 or so fans at the Hollywood Palladium.