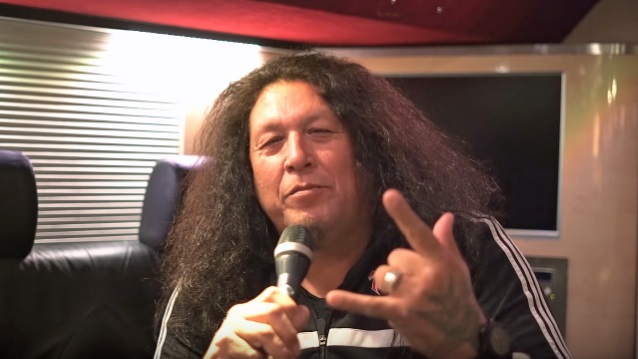 Kaaos TV conducted an interview with vocalist Chuck Billy of San Francisco Bay Area metallers TESTAMENT prior to the band's March 21 concert at Pakkahuone in Tampere, Finland. You can now watch the chat below.

Asked for his thoughts on SLAYER's decision to retire after completing one "final" world tour, Billy said: "We've toured with SLAYER. And I think anybody… If you're not into it… I don't know what their reason is [for calling it quits], but you have to have your heart and soul in whatever you do. Maybe they just felt it was time; I don't know. But SLAYER will be a big part of history and a big part of what metal is today. And to choose to go out on a high note is always a good thing. And especially if you can afford to go out on a high note and enjoy life and do other things than being on the road and touring. Especially if you do it for 30, 40 years, at some point, you might go, 'Well, now I have a family, and maybe I wanna be home with my kids or see my kids grow up.' It's hard to make that decision, and sometimes it probably gets harder to leave home, the older you get and when you have family involved. At some point, you have to think about your family too, and make it work for everybody."

Speaking about how long he can see TESTAMENT carrying on, Chuck said: "We've never really thought about an endgame or an end plan. Over the years, it was always tougher before we had our reunion [in 2005]. Maybe thoughts in the back of our mind said, 'Maybe this is not working out. Maybe we should stop.' But once we had the reunion and everybody was back, we've had a solid lineup, and we've been on tour like a real working band again. So right now, things are good and everybody's surviving and fans seem to be enjoying the shows and there is no goal like that. But we have two more records with Nuclear Blast, and we'll see, at that point, if we get another record deal, we'll keep carrying on. And if we don't, then maybe we'll just write music and put it on the Internet, since that's [how] people get music these days. 'Cause maybe it isn't all just about the touring too."

TESTAMENT will support SLAYER on the first two legs of the Tom Araya-fronted outfit's last-ever North American run of dates. Also scheduled appear on the bill are LAMB OF GOD, ANTHRAX and BEHEMOTH (with NAPALM DEATH replacing BEHEMOTH for the second leg).

TESTAMENT is continuing to tour in support of its latest album, "Brotherhood Of The Snake", which was released in October 2016 via Nuclear Blast. The cover was once again created by renowned artist Eliran Kantor, who also handled the art for TESTAMENT's previous album, 2012's "Dark Roots Of Earth", and worked with bands like HATEBREED, SOULFLY and KATAKLYSM in the past.