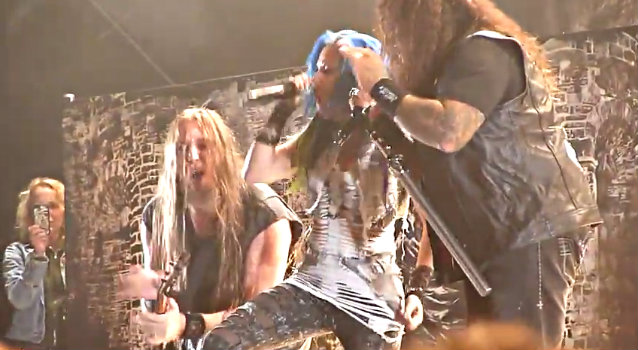 ARCH ENEMY singer Alissa White-Gluz joined TESTAMENT on stage on August 14 at the Summer Breeze festival in Dinkelsbühl, Germany to perform the TESTAMENT classic "Into The Pit". Fan-filmed video footage of her appearance can be seen below.

TESTAMENT in January announced the departure of bassist Greg Christian.

In a recent interview with 100PercentRock.com, Chuck Billy stated about Christian's latest exit from the band: "Well, I think Greg, he informed us that he wasn't going to be participating on the new record release and that was his last tour with us. We knew we had Australia coming up, so, of course, Steve DiGiorgio was probably one of the first ones to come to mind. He did 'The Gathering' record with us and we enjoyed that whole cycle of touring, so he was definitely, probably, our first choice. We didn't want to go through auditions and do all that. We just knew that he was here, and he could do it, and it was killer."

ARCH ENEMY played its first show with Alissa White-Gluz on May 23 at Turbohalle in Bucharest, Romania. Angela Gossow, who joined ARCH ENEMY in 2000 and made her debut on the now-classic "Wages Of Sin" (2001),has stepped down as frontwoman and will focus on management, while Alissa takes her place.