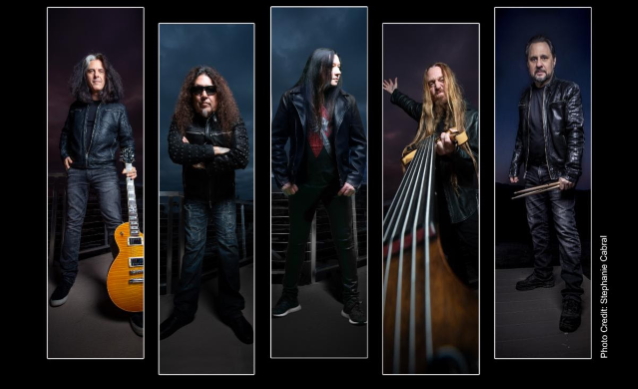 An original member of thrash metal legends SLAYER, Lombardo was the guest drummer on TESTAMENT's 1999 studio album "The Gathering", which also marked the first time the band worked with then-up-and-coming British producer/engineer Andy Sneap. "The Gathering" was widely considered to be an improvement over 1997's "Demonic", an album that saw singer Chuck Billy employ a more guttural style of vocals and was released at a time when thrash acts as TESTAMENT had fallen out of favor.

Billy comments: "I'll state the obvious, We are more than overwhelmed to welcome back Dave Lombardo to play drums with TESTAMENT. We are so excited to share the stage again with Lombardo. Dave added immense power when he joined the band for 'The Gathering' [album], and we are ecstatic to see what new flavor he will bring back to TESTAMENT."

Lombardo states: "This is a long-awaited reunion that was bound to happen. Once upon a time, we created a thrash masterpiece. I have no doubt that our musical chemistry will pick up exactly where we left off. I love the TESTAMENT family and am very excited to be joining them once again. Pure brutality awaits."

Guitarist Eric Peterson expresses: "Having Dave Lombardo join us again feels like we are picking up where unfinished business had left off. There is a silver lining to every cloud and working again with Dave calls for us to celebrate with our horns held high."

In January, TESTAMENT parted ways with its longtime drummer Gene Hoglan. Hoglan originally played drums on "Demonic", but didn't stick around long enough to do any touring with the band. He officially joined TESTAMENT in 2011 and played on the group's last three albums: 2012's "Dark Roots Of Earth", 2016's "Brotherhood Of The Snake" and 2020's "Titans Of Creation".

TESTAMENT, EXODUS and DEATH ANGEL played the sole 2021 date of "The Bay Strikes Back Tour" last November at the Fox Theater in Oakland, California. The gig took place less than two months after the three bands shared the stage at the Aftershock festival in Sacramento.

"The Bay Strikes Back Tour" was originally scheduled to kick off on October 6 at the Fremont Theater in San Luis Obispo, California and make stops in Austin, New York, and Detroit before concluding in Oakland. The tour has since been rescheduled to take place in April and May 2022.