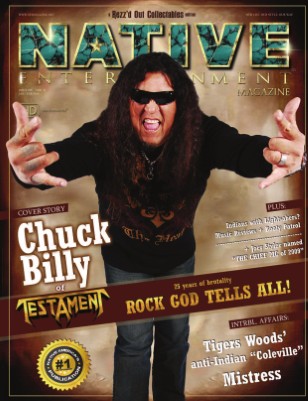 Vocalist Chuck Billy of San Francisco Bay Area thrash metal veterans TESTAMENT is the first Native American entertainer to be permanently displayed at the Hard Rock Casino in Albuquerque, New Mexico. Chuck will make an appearance at the location on January 14 at 5 p.m., with an autograph session scheduled for 6 p.m.

In 2010, Billy, a member of the Hopland band of Pomo Indians, was featured in the "Up Where We Belong: Native Musicians In Popular Culture" exhibit at the National Museum Of The American Indian.

When asked how his Pomo beliefs have affected his work with TESTAMENT, Billy stated in an interview, "Back in 2001, I had cancer. And, I was born and raised a Catholic, went to church and the whole bit, so it wasn't like I was really turned on to my Native American side at all. But it got to where I really turned to my Native American spirituality and went through the process of healing ceremonies, sweat lodges and just — just believing. Being focused on the power of the Earth, as well as the power of the mind. And, here I am. Back on tour, doing what I love."

Regarding what is happening with his tribe these days, Billy said, "Our reservation is up in Hopland, so I spend a lot of time up there. Right now, our tribe has come a long way. In the past, we didn't have much money for schools, transportation or even keeping up the land. But, 10 years ago, they built a casino there and started generating revenue for themselves, then started improving the schools, roads, everything. And now, here comes the government with its hand out, suddenly wanting a piece of it, which upsets me a bit."

"Up Where We Belong: Native Musicians In Popular Culture" exhibit photos: