TESTAMENT frontman Chuck Billy joined DEATH ANGEL on stage for a cover of METALLICA's "Trapped Under Ice" during the benefit concert for DEFTONES bassist Chi Cheng, which was held on Saturday, November 29 at Fat City in San Francisco, California. Also appearing on the bill were WILL HAVEN (with a special guest appearance by original singer Grady Avenell), PHALLUCY (featuring DEFTONES drummer Abe Cunningham, EIGHTFOURSEVEN and DEATH VALLEY HIGH.

According to photographer Alan Ralph, DEATH ANGEL had several musicians handling bass duties during different parts of the show (following the recent departure of Dennis Pepa), including a guy named Sammy who was described by singer Mark Osegueda as "the first white dude to ever play in DEATH ANGEL." Sammy played almost the first half of the set before Steev Esquivel (SKINLAB) took over for one or two songs, followed by a guy named Damien Sisson (from the San Francisco band SCARECROW), who played the rest of the show with the group.

Check out photos from Alan Ralph at this location.

DEFTONES bassist Chi Cheng has not shown any further signs of coming out of his coma, according to a recent post by his mother, Jeanne. Cheng was gravely injured in a November 3 car crash in northern California and remains unconscious and in the hospital. Although he showed some signs of response, Jeanne wrote, "Chi's condition remains the same — serious, but stable. He still lies in a coma, however his vitals (heart, lungs, and blood pressure) all exhibit very stable functions and doctors have begun removing much of the excess monitoring equipment. Chi remains strong in his fight to recover."

Cheng is 38 years old and is a poet as well as a musician. He released a CD of his poetry called "The Bamboo Parachute" in 2000.

Cheng has been a member of DEFTONES since its formation in 1988. The band released its debut disc, "Adrenaline", in 1995 and scored a platinum record with 2000's "White Pony".

The group has been recording its sixth album, "Eros", with a spring 2009 arrival in the works. 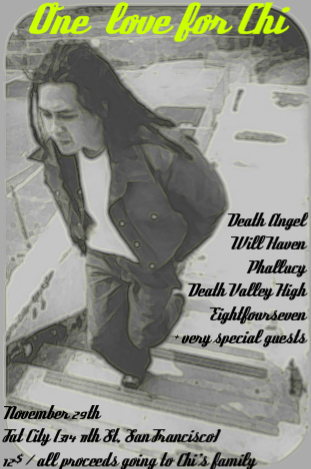