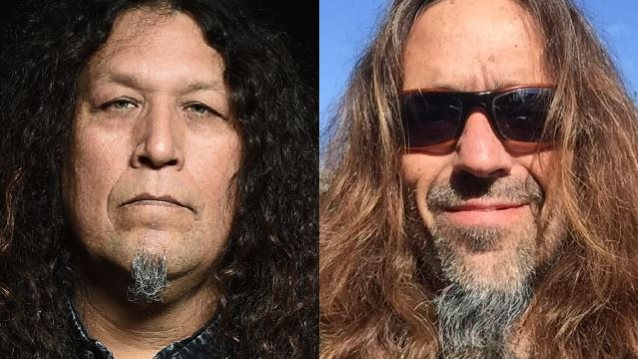 Chuck Billy says that his former bandmate Greg Christian wanted to be an "equal partner" in TESTAMENT after rejoining the band following a nine-year break.

Christian — whose acrimonious January 2014 exit from TESTAMENT was well publicized on these pages — has been critical of his former bandmates for much of the past two years, claiming in various social-media posts that he was "fully taken advantage" of by TESTAMENT because he was "shit broke and struggling" while he was a member of the group and explaining that he only continued playing with them because he needed to pay his bills.

Addressing his former bandmates in a recent Facebook message, the bassist wrote: "Truth is, all I ever wanted to do was play music — but truth also is both [Billy and guitarist Eric Peterson] have been living off my investment along with [their] own, while I've been starved out. That's polluted the energy of TESTAMENT. It can be fixed, but only by actual corrective action."

He added in a separate post: "I wasted my fucking life working for and investing my time and energy building something only to be ass out after all these years. At the time when I should be doing OK. It's not like I didn't earn it. And to have one of the two people that've been living off my investment smile and act like they give a shit. Wow.

"I don't hate. I just don't care. Obviously it's mutual. Talk is just hot air and lip service. In the real world, I made a real investment. The only way to make things right is with real money. Until then. I don't care."

He went on to say: "If I had it to do again — [I] would've done something different with my life. Not that. Not with those people. It wasn't worth it and it was a huge mistake… I love playing on stage and put everything I have into it. But I still think I made a bad life choice here."

Asked by Metal Forces to comment on Greg's claims and accusations, Billy said: "Me and Eric own the band. Greg doesn't own the band. Greg left the band for nine years and wanted to come back in the band and be an equal partner, and that's not what the deal was. Greg came back as a reunion bass player, and that turned into seven years of doing a reunion. There were never talks about 'Hey, come on back and let's be equal partners like we were when we started this band.' That's not what was gonna happen. I think he expected that, and we agreed to disagree."

The singer continued: "While they were off doing whatever they did in life, me and Eric held down the fort for all of those years, and they were tough years. Those were in the '90s, when it was very tough for heavy metal. We weren't making any money. Yeah, we felt strong that, 'No. If it was you, Greg, or if it was Steve [DiGiorgio, bass], or if it was any other bass player, here's what we're gonna pay you to play bass in TESTAMENT. You can do whatever you wanna do.' Like Gene [Hoglan, drums], Steve and Alex [Skolnick, guitar]; whenever they're not in TESTAMENT, they're doing other projects. We don't hold them up; we don't say, 'You're in TESTAMENT. You can't do anything else.' Greg felt what he felt and decided he didn't wanna do it, so he left. I think maybe he regrets it, and he's talking out because of that. That's all I can think. [Laughs] He got to travel and play music around the world, and didn't have to get a job. I thought it was pretty good. [Laughs]"

TESTAMENT's twelfth album, "Brotherhood Of The Snake", was released on October 28 via Nuclear Blast.