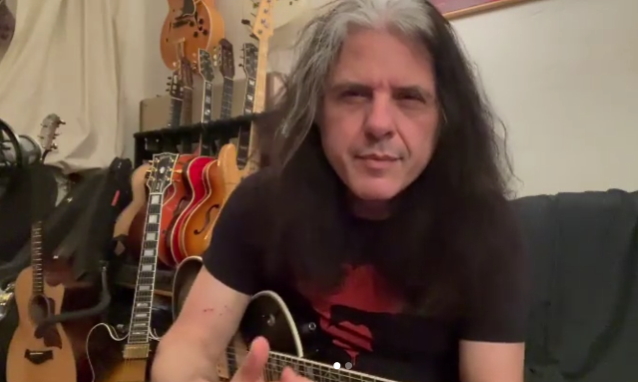 TESTAMENT guitarist Alex Skolnick says that he is in favor of some kind of a coronavirus vaccine passport program whereby concert venues can ask patrons to show proof of testing or vaccination before attending certain events.

Skolnick addressed the hot-button issue in a brand new interview with André Cholmondeley of Make Weird Music. Asked what he thinks about clubs and promoters around the country announcing that they will begin staging events for only those guests who show proof of full vaccination, Alex said: "Yeah, I think that's what we need to do. And it's also gonna be limited capacity as well."

He continued: "To go to certain countries, we need to get a yellow fever shot, and we carry this card that's put out by the World Health Organization that is proof of vaccination. What's the difference? We've been doing this for years. We wouldn't think otherwise. We don't wanna risk getting somebody else sick. So why would there be an issue here? And then, when people complain about the vaccine — 'I don't know what's in it. I'm suspicious…' Well, are you suspicious of the polio vaccine? 'Cause I think everybody gets that. I don't think you leave the hospital without getting certain vaccines."

Over 100 million Americans — more than 30% — have received at least one dose of the three vaccines, according to the Centers for Disease Control and Prevention.

Johnson & Johnson's vaccine, which became available in the United States last month after the U.S. Food and Drug Administration gave it emergency use authorization, was tested with new variants of COVID-19, and has shown to be effective against them; Pfizer and Moderna were tested prior to the emergence of these variants.