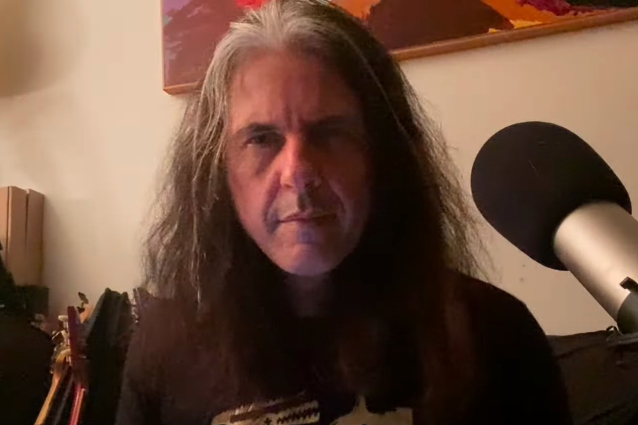 TESTAMENT guitarist Alex Skolnick, who has been an outspoken critic of America's 45th president on social media, has released an anti-Donald Trump song called "Trump Sucks". The funky track features Skolnick's rap-style rhymes in which he touches upon a number of his familiar grievances regarding the Trump administration, including alleged corruption, nepotism and criminality on a scale never before experienced.

In a statement accompanying the YouTube release of the video, Skolnick wrote: "This song just poured out of me yesterday. It was completed in a matter of hours. To all the # Trump2020 and # Maga folks who've been flooding my timelines ever since my post the other day about the election, I'd like to say thank you, sincerely. You've inspired me to do something a bit different (for me, anyway): Rapping Enjoy!

"PS No time for debates here. If you hate it, please ignore, wait for another post you like better or unfollow. Cheers. And oh yeah.. #trumpsucks".

We got a bad situation all across the nation
The White House is under occupation
And liberation from this administration
Is needed right now, no time for vacation
No regulation for clean air and water
He got to office and installed his own daughter
She serves no purpose except for appearance
Initially denied a security clearance
Her husband, Jared, is even worse yet
Shady ties, analyzed as a security threat
Vladimir Putin got Trump in his pocket
Kim Jong-un just launched another rocket
I haven't even mentioned Betsy DeVos
Wilbur Ross and their cost and the lives that were lost
Abomination, an epic fail
Just like Bannon and Flynn, he belongs in Jail

He took a hatchet took the Hatch Act
Breakin' them laws, violating the Emoluments Clause
Sycophants and cronies keep him in power
Pissing on our norms like a golden shower
A life failing upward, not a heavy lifter
An upscale, slumlord, two-bit grifter
You may be someone that we cannot sway
But for me, there's only one thing left to say

He's gonna cheat all he can, he will not rest
Disrupt the post office, use Kanye West
When the polls close and the people choose
He's gonna claim 'voter fraud' or say 'It's all fake news!'
You like this guy? Because he's rich?
Just like Bill Maher said, Trumps a 'whiny little bitch'
Lying and tweeting and interrupting, always grouchy
Contradicting scientists, even Dr. Fauci
So what'll we do? No time to sit and gloat
Call you friends and family, everybody's gotta vote

Late last week, Skolnick said it was "more urgent than ever" to vote Trump out of office in November.